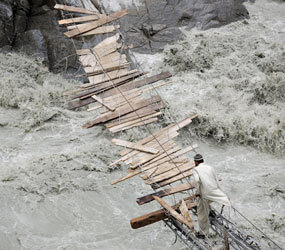 BANGALORE, India – Church charities in Pakistan stepped up their efforts Aug. 12 to distribute vitally needed relief supplies to some of the millions of people affected by the worst flood in the South Asian nation’s history.

The response gained momentum as Pope Benedict XVI expressed his condolences in a telegram to Archbishop Lawrence Saldanha of Lahore, head of the Pakistan bishops’ conference. “The Holy Father commends the deceased to the Almighty” and “prays for all involved in providing assistance to the victims,” the pope said in his message.

Cooking equipment, hygiene kits and bedding were being delivered Aug. 11 to severely hit areas, but workers said devastating conditions were hampering the efforts of relief workers.

“Access to a lot of the affected areas is still impossible, and it’s hard to organize distribution amid the panic,” said John Joseph of Caritas Islamabad-Rawalpindi.

He spoke in the compound of Holy Name Church in Nowshehra, Khyber Pakhtunkhwa province, where distribution began after prayers and blessings from Father Amir Yaqub, the parish priest.

“The situation grows increasingly desperate,” the appeal said, adding that more than 1,600 people had died and about 14 million people were directly affected by the flooding.

The U.N. Office for the Coordination of Humanitarian Affairs launched an appeal Aug. 11 for $460 million to meet the humanitarian needs of flood victims.

“The death toll has been relatively low compared to other major natural disasters. But if we don’t act fast enough, many more people could die of disease and food shortage,” Holmes said.

“With continuing rains and floods spreading to more areas, the challenge before us is growing by the day,” Carolyn Fanelli, head of programming and acting country representative for Catholic Relief Services in Pakistan, told Catholic News Service Aug. 10 from her office.

“We have already distributed emergency relief material to 6,400 people and our target is being regularly revised upward,” she said.

The devastating floods that began in late July in the mountainous north under incessant monsoon rains have claimed more than 1,600 lives and affected more than 13 million people.

The United Nations reported Aug. 9 that the floods have affected more people than the 2004 Indian Ocean tsunami, the 2005 earthquake in the Kashmir region of Pakistan and the January earthquake in Haiti combined.

Nasrullah Khan, head of the CRS office in mountainous Besham, 185 miles north of Pakistan’s capital, Islamabad, said, “Our staff have covered up to 40 kilometers (25 miles) on foot to remote areas where the people are in great suffering. Mules remain the only option for us to (get) the material to those in remote areas made inaccessible by landslides,” Khan told CNS Aug. 10.

CRS has already started a cash-for-work program in the mountainous region to repair the drinking water supply system the agency built after the 2005 earthquake.

“Ironically, though water caused all the problems, people are struggling for water now. They have to walk miles to fetch drinking water,” Fanelli said.

As the flood-affected area grows, roads and bridges have been washed away and much of the country’s communication network has been destroyed. An official of Caritas Pakistan said some supplies, including plastic sheeting for shelter, water purification tablets, cooking utensils and food items, have gotten through.

“The destruction and human suffering caused by the floods is colossal. Thousands have nothing left and are living in the open,” Anila J. Gill, national executive secretary of Caritas Pakistan, told CNS from her office in Lahore.

Gill said all Catholic dioceses in Pakistan are involved in the relief work. By Aug. 9, the agency had assisted 4,800 families with tent materials, and hygiene and kitchen kits.

“For the next three months, we will concentrate on the relief work,” Gill explained. “The people are in trauma. The challenge now is to support them to survive and overcome the tragedy.”

An outbreak of disease and diarrhea because of the lack of safe drinking water is affecting the population in flooded areas.

“Medical personnel have not reached many areas and our challenges are increasing day by day,” Gill said.

Meanwhile, Caritas Korea is preparing to send $30,000 to its sister organization in Pakistan to help with relief efforts, reported the Asian church news agency UCA News.

“The money will be sent to Pakistan as soon as possible,” said Theresa Kim Jou-yeon, the agency’s public relations officer.

“It’s unfortunate that we have already used much of our urgent relief funds. We sent $400,000 to aid the earthquake victims in Haiti and $50,000 to Chile earlier this year,” she said.

In addition, Caritas Australia has called for urgent support for those suffering from the “horrendous” flooding.

Launching Caritas Australia’s South Asia Floods Appeal – Pakistan Aug. 10, the agency’s chief executive, Jack de Groot, said the task of getting assistance to the devastated communities is “incredibly challenging,” with roads and bridges damaged or completely swept away and landslides adding to the isolation and destruction of many areas.

De Groot said that Caritas Australia had joined Pakistani partners in providing for immediate needs such as food, water and shelter to flood victims in Shangla, Kohistan, and Swat districts in the northwestern part of the country.

“But the emergency response needs to be significantly increased. I urge all Australians to dig deep to support partners in Pakistan to deliver this much-needed assistance,” he said.

Contributing to this story was Anthony Barich in Perth, Australia.