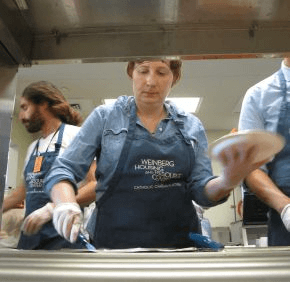 By Erik Zygmont
ezygmont@CatholicReview.org
Twitter: @ReviewErik
One way to guarantee an argument between Jews and Christians, asserted Christopher Leighton, executive director of the Institute for Christian and Jewish Studies (ICJS), is to solicit their interpretations of a certain book.
That book, the focal point of a lively discussion that took place Sept. 17 at Catholic Charities’ Our Daily Bread Employment Center, was Shel Silverstein’s children’s classic, “The Giving Tree.”
It is the story of a boy and his wants and needs as he grows into a young adult, a mature man and an old man. It is also the story of the obliging tree who grants those desires at great expense to itself; at the end, the tree, which gave up its fruit, branches and even its trunk, has nothing left to offer except its stump as a place for the boy – now a tired old man – on which to sit.
“Does this story describe what you consider to be a model of charity and justice in your tradition?” Leighton, a Presbyterian minister, queried the approximately 40 participants invited to the facilitated discussion by Catholic Charities and The Associated: The Jewish Community Federation of Baltimore.
As Leighton predicted, reactions to the story were strong and varied in the nevertheless collegial and good-natured discussion that followed.
“You don’t want your kid to become that boy, that’s for darn sure,” said Kristin Kinkopf, director of mission integration for Catholic Charities. “If the tree is a parent, it could have done a better job – but it did love.”
Jimmy Kwak of the Governor’s Office of Community Initiatives noted that many of the discussion participants were “really projecting onto the boy.”
Beyond the boy’s sense of entitlement, Kwak argued, was a less sinister dynamic.
“The boy feels he can ask,” Kwak pointed out. “He can make himself vulnerable to the tree.”
Heather Miller Rubens, ICJS associate director and Roman Catholic scholar, pulled Dorothy Day, the founder of the Catholic Worker Movement currently being considered for beatification, into the discussion.
“This is a story of ‘the giving tree,’ not ‘the taking boy,’” Rubens said, noting that, like the tree, Day had faced criticism for propagating charity without discriminating in favor of the “deserving poor.”
Both Day and the fictional tree gave “regardless of what the reception is and regardless as to whether the kid is going to become a jerk or not.”
“I think there’s something there that resonates with Catholic tradition,” she concluded.
ICJS Jewish scholar Benjamin Sax said that a hypothetical rabbi might criticize the story on the basis that the giver “is not a tree anymore” by the end of the story.
“She gave to the point that she could not be who she is anymore,” Sax said, noting that adherents to Jewish tradition are indeed required to “love the stranger” but are not bound to the same concept of “overflowing” love inherent in Christianity.
When it came to action, there was no difference between the two groups, who before the discussion served dinner to the residents of Weinberg Housing and Resource Center, a low-barrier shelter that includes case management services located at 620 Fallsway, across the street from Our Daily Bread. Unlike the much-maligned boy in the story, the residents by and large accepted the charity with cheer and gratitude.
The friendship between William McCarthy Jr., executive director of Catholic Charities, and Marc Terrill, president of The Associated, was the impetus for the evening.
“Bill and I are both driven by a passion for the good of society, so we said, ‘Let’s do something together in a collaborative way,’” explained Terrill, adding that the two had worked before, but usually as part of a larger initiative involving the city or an umbrella charity, such as the United Way.
“We’ve made institutional pledges to work together because we share so much,” Terrill said, adding that there will be more collaboration in the future.