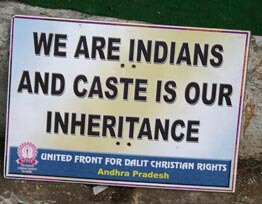 “The (church) hierarchy has been rather lethargic to our cause,” said Franklin Thomas, coordinator of the National Council of Dalit Christians.

The Scheduled Caste Act of 1950 permitted Hindu dalits to have free education and reserved government jobs to improve their social status. The benefits were extended to Sikh dalits in 1956 and Buddhist dalits in 1990.

Muslim and Christian dalits have not been granted similar rights and are confined to remedial jobs.

A dozen members of the Indian Parliament, six Catholic bishops and Protestant church leaders visited the protest in New Delhi, where more than 600 Christian dalits participated. The protest was to end Dec. 9.

Bishop Johannes Gorantla of Kurnool, a dalit, told participants at the protest Dec. 2 that Christians are being punished for their faith.

“This discrimination is contrary to the equality and religious freedom our constitution guarantees,” he said.

Bishop Gorantla told CNS he was “happy about the laypeople taking the dalit issue forward.”

Although two thirds of India’s 17 million Catholics are dalits, only 10 percent of nuns and priests are of the low caste.

Catholic leaders have led several spirited campaigns against the undeclared apartheid against Christian dalits, but have become quiet since the Hindu nationalist Bharatiya Janata Party assumed federal power in 1998.

Father Cosmon Arokiaraj, executive secretary of the dalit commission of the Catholic Bishops’ Conference of India, told CNS “there is a resurgence in the dalit struggle with the lay leadership.”