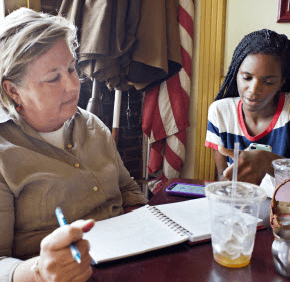 By Elizabeth Lowe
elowe@CatholicReview.org
Twitter: @ReviewLowe
RODGERS FORGE – Anne-Stuart Darrell is refreshed and inspired each month after hearing members of the Christ Child Society of Baltimore talk about their service in the Baltimore community.
“We start every meeting with ‘give me a story’ and the stories are so inspiring for each of us. It makes us get going,” said Darrell, a core group member of the Baltimore chapter and parishioner of Shrine of the Sacred Heart in Mount Washington. “Together we do a lot of good.”
The Christ Child Society of Baltimore, which dates back more than 100 years, is a chapter of the national organization and was reinvigorated last September. The local chapter works to serve the needs of parents and children in the Baltimore community.
Cathleen White, a parishioner of St. Pius X in Rodgers Forge, had the thought to revive the Baltimore chapter after learning about the organization from her daughter and a friend. Both are involved with Washington, D.C. chapters.
In less than a year, the Baltimore chapter has gained 100 supporters, White said. Thirty women comprise the core group. Women of all faiths and ages may join.
Volunteers and the chapter’s partners have given their time and/or donated items, including layettes, toiletries, baby clothes and food, to more than a dozen organizations, including the Hampden Family Center, Sisters Academy of Baltimore, Mother Seton Academy in Baltimore, Our Daily Bread in Baltimore and Pregnancy Center North in Towson.
To date, the chapter has distributed about 2,800 children’s books to the organizations it supports, White said. Outreach also includes mentoring, tutoring and a growing wellness program.
Darrell, the core group member, mentors a Sisters Academy graduate and tutors a fifth-grader at Hampden Family Center.
“(It lets them know) somebody is in their corner and someone is rooting for them,” Darrell said. “It gives them a pull up, a hand up.”
“Just think of a child who knows there are people behind them, not just people sending in a (monetary) contribution, but people who actually give their time and talents in a personal way,” said School Sister of Notre Dame Delia Dowling, president of Sisters Academy. “Their giving and support is relational and personal. They see a need and they go in and make something happen.”
All 59 Sisters Academy students were touched by the Baltimore chapter during the 2012-13 school year, said Sister Delia, who called the women “super heroines.”
“The benefit of getting involved is that anything is something, even if you think it’s not a big deal,” said Kelly Bollinger Burke, an attorney who is helping the chapter achieve nonprofit status and parishioner of the Cathedral of Mary Our Queen in Homeland. “I don’t think there can be too many people trying to cheer kids on and letting them know they can have a shot at doing something amazing. It doesn’t take a huge commitment to participate or get involved in one of the activities we’ve serviced.”
For information, to join or support the Christ Child Society of Baltimore, visit facebook.com/baltimorechristchildchapter or email baltimore@nationalchristchild.org.
PrevNext