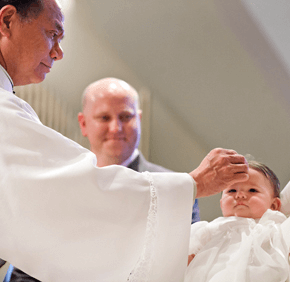 By George P. Matysek Jr.
gmatysek@CatholicReview.org
Twitter: @ReviewMatysek
As nearly 160 priests and more than 70 deacons processed up the long aisle at the Cathedral of Mary Our Queen in Homeland during the annual Chrism Mass April 14, many people in the packed cathedral craned their necks to catch glimpses of familiar faces.
Smiling and waving at clergymen they recognized, some parishioners from across the Archdiocese of Baltimore snapped photos, reached out to pat passing clerics on the arm or held smartphones overhead to record the grand procession. Many of the priests and deacons acknowledged the outpouring of affection with smiles or nods as they joined a congregation of approximately 1,000 in singing a triumphant processional hymn, “At the Lamb’s High Feast We Sing.”
From the very first moments of the beginning of the Holy Week liturgy to an end that included sustained applause for priests and deacons, the Chrism Mass was a moment for clergy to show their unity with one another and their bishop – and for members of the laity to demonstrate their appreciation for the ordained.
“It’s more difficult on the priests now because they don’t have the support they had before with the number priests,” said Kathy Furth, a parishioner of St. Lawrence Martyr in Jessup. “They need our support.”
Priests renewed their vows during the nearly two-hour Mass, promising to be more united with Christ and to be moved only by “zeal for souls” and not any gain.
In his homily, Archbishop William E. Lori told priests that the Spirit of the Lord is calling them to an “evangelical form of life,” a life of prayer, “loving obedience, simplicity and celibacy” – all for the sake of mission – “such that we might not only perform a function in the life of the church, but rather bear personal witness through self-giving love to the Christ whose saving words and deeds we sacramentally re-present,” he said.
Evangelization requires a “vibrant partnership” between the ordained and the laity, said Archbishop Lori, who was joined at the Mass by Bishop Mitchell T. Rozanski, Bishop Denis J. Madden and retired Bishop William C. Newman.
“Reaching those who no longer practice their faith or who never heard the Good News requires that everyone in the church be dedicated to Christ, live their vocations, and work together in a spirit of trust, holiness and fidelity,” he said, “to show to the world its redeemer, Jesus, the Christ.”
The archbishop blessed both the oils of catechumens, which will be used at the baptisms of those preparing for the sacrament through the Rite of Christian Initiation, and the oils of the sick, which will be used in the sacrament of the anointing of the sick. He also consecrated Holy Chrism, a mixture of olive oil and balsam fragrance, that will be used to anoint the newly baptized, to seal candidates for confirmation and anoint the hands of priests and the heads of bishops at their ordination. It will also be used in the rites of anointing at the dedication of churches and altars. As part of the consecration rite, the archbishop breathed over a vessel containing the chrism – calling down the Holy Spirit.
While the liturgy proceeded, a team of volunteers was busy in the cathedral undercroft filling 600 bottles with the blessed oils, distributing them to representatives of 150 parishes and approximately 40 institutions at the end of Mass.
Deacon Kevin Bagley of St. Leo in Little Italy, said the oils are “tactile, real symbols that people can see, feel and touch.”
“These symbols lead to a greater reality,” he said, moments after collecting his oils for his parish. “All these symbols have a deeper meaning than just the obvious. They are so rich, going right back to the time of Christ. We use them for sacramental purposes to heal our people and to consecrate and bring people into the church.”
Deacon Bagley called the Chrism Mass a “marvelous and wonderful” celebration.
“It’s the church at its best,” he said, “as we come together as one people in communion.”
Father C. Douglas Kenney, associate pastor of St. Margaret in Bel Air, said he was touched by the outpouring of love from people throughout the archdiocese.
“It was so moving to have so many people there supporting and encouraging us,” he said. “I felt the warmth and spirit of the whole assembly. The smiling greetings of the people make being a priest in our archdiocese so special.”
Sharon Alasandro, a parishioner of St. Mary, Pylesville, said the liturgy was a “powerful experience,” adding that it was “amazing” to see so many priests united in prayer.
“You could even feel the vibrations of all the voices joined together,” she said. “It’s really awesome.”
Also see:
Easter in the Catholic Church 101
See what this cancer patient gave up for Lent
PrevNext