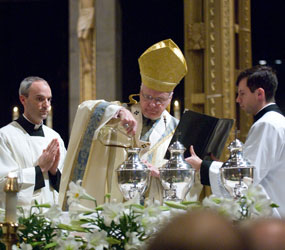 As approximately 170 priests renewed their vows during the April 18 Chrism Mass at the Cathedral of Mary Our Queen in Homeland, Archbishop Edwin F. O’Brien choked up for a fleeting moment when he prayed that he would fulfill his office despite his own “unworthiness” – becoming more like the High Priest and Good Shepherd for the priests and people he serves.

The significance of his emotion was not lost on Father Gerard Francik, pastor of St. Mark in Fallston.

“For me, that’s that special relationship we have between priest and bishop that’s so beautiful in this diocese,” Father Francik said. “It has been there for Archbishop (William D.) Borders, Cardinal (William H.) Keeler and now Archbishop O’Brien. To come together at the Chrism Mass with a bishop like that and to renew my own commitment to God’s people together, it means the world.”

During the solemn liturgy, Archbishop O’Brien followed ancient tradition by consecrating the chrism oil and blessing other oils that clergy will use in their ministry.

The chrism, which the archbishop mixed with sweet-smelling perfume, will be used to anoint the newly baptized, seal candidates for confirmation and anoint the hands of priests and the heads of bishops at their ordination, as well as in the rites of anointing at the dedication of churches and altars.

During the liturgy, the archbishop leaned over a shiny silver vessel that held the chrism. He breathed on it, calling down the Holy Spirit.

In his homily, Archbishop O’Brien celebrated the priesthood in a special way, thanking his brother priests for their dedicated service.

“Like the Good Shepherd, so many of you can call the members of your flock by name – reassuring them in time of fear, encouraging them in their trials and accompanying them through life, unto death,” he said.

Priests lead their people in love, the archbishop added, nourishing them by their words and strengthening them through the sacraments.

“Truly, you show daily your love for the flock of Christ,” he said, “with a Godly, dispossessive love.”

At the end of his homily, the nearly full cathedral was alive with applause. People from throughout the archdiocese rose to their feet and gave their priests a prolonged standing ovation. It was a gesture that was repeated at the end of Mass as the long line of robed clergyman recessed from the sanctuary.

“It makes you feel good,” said Father T. Austin Murphy Jr., archdiocesan vocation director. “We really appreciate it because we need stuff like that to really remember that what we do actually does touch people and they touch us now too.”

Father Murphy said the outpouring of support had a special impact on seminarians seated at the front of the cathedral.

“To have them see that and know that, wow, these people are praying for us and they want to see us succeed – that does speak to them very loudly,” Father Murphy said.

Patricia Gifford, a parishioner of St. John in Columbia, called the Chrism Mass one of the highlights of the year.

“It’s a great time to renew what our faith is all about and how important the rituals are,” she said. “It joins us worldwide because every diocese does a Chrism Mass.”

Gifford’s husband, Deacon Paul Gifford, pastoral life director of St. Clement I in Lansdowne, was one of more than 60 deacons present for the liturgy. Bishop Denis J. Madden, Bishop William C. Newman and Bishop Mitchell T. Rozanski were also part of the celebration.

Much of the music for the liturgy was taken from the works of Robert Twynham, a former longtime music director at the cathedral who recently died.
“Andrew Greeley once said that what people want most in their priests are hopeful, holy men who smile,” Archbishop O’Brien said. “People of God, you have such men before you.”