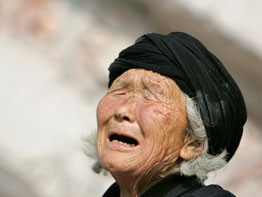 CHENGDU, China – Catholics joined other Chinese in observing three minutes of silence May 19 to pray for and mourn those killed by the earthquake that hit southwestern China a week earlier.

The Chinese government declared an unprecedented three-day period of national mourning May 19-21 for victims of the magnitude 7.9 quake. Entertainment businesses were to be closed and the Beijing Olympics torch relay in Zhejiang and Shanghai was suspended until May 22, reported UCA News, an Asian church news agency.

After a Mass at Immaculate Conception Cathedral in Chengdu, provincial capital of Sichuan, about 80 Catholics stood and observed the three minutes of silence at 2:28 p.m., the time at which the quake struck a week earlier. The quake’s epicenter was in Wenchuan, just northwest of Chengdu.

Around the country, air-raid sirens and the horns of cars, trains and ships were sounded in expressions of grief as the Chinese stood in silence.

Father Simon Li Zhigang, diocesan administrator, told UCA News May 19 that not many people attended the Mass because it was celebrated on short notice. He added that about 100 people attended a memorial Mass for the dead that morning.

In Hong Kong, Cardinal Joseph Zen Ze-kiun led diocesan priests in observing the three-minute silence. Donald Tsang Yam-kuen, a Catholic and the chief executive of Hong Kong, led high-ranking local officials in the moments of silence, after which he made the sign of the cross.

Government offices and schools in Hong Kong flew the Chinese flag at half-staff as did all government offices on the mainland, in neighboring Macau and at all Chinese diplomatic missions abroad.

Zhang Jingqi, a 22-year-old Catholic volunteer who recently returned to Chengdu from hard-hit Mianyang, told UCA News May 19 that she could never have imagined such a silence as during those three minutes, which she said showed the “huge power of solidarity among the people.”

Mianyang is nearly 50 miles north of Chengdu, and Zhang said she helped register the names of quake survivors. She recalled one woman who underwent surgery around the time the quake occurred and later returned home to find her husband dead and her two children missing.

“The woman was still weak after the surgery, but she just kept crying and said nothing,” Zhang said.

Li Yuan, another Catholic volunteer who administered first aid to quake survivors, told UCA News May 19 that what moved her most was hearing of a teacher who died using his body to shield three primary-school children from falling masonry. The children lived.

On May 16, 50 priests and nuns from Hebei, Tianjin, Shanxi, Shaanxi and other provinces – including a team sent by Jinde Charities, a nationwide church-run nongovernmental organization – arrived in Chengdu to help survivors. Many Catholic youths also helped.

A May 18 report from Jinde Charities said its team went to Shifang, another hard-hit city. Team members helped spread disinfectant to avoid disease and consoled survivors who took shelter in tents and makeshift huts.

In Chengdu, Father Li said the government’s Earthquake Relief Command Unit and the Red Cross enlisted church workers for coordination, because such a huge project cannot be handled by individual organizations or units.