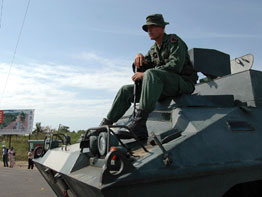 President Chavez “cannot carry the country into an armed conflict just because he feels like it,” said Archbishop Roberto Luckert Leon of Coro, whose remarks were reported by Colombian media. “He has to consult with the country.”

Archbishop Luckert, vice president of the Venezuelan bishops’ conference, criticized Chavez for moving troops to the border of Colombia after the March 1 incident. He said President Chavez, who has clashed repeatedly with the Catholic Church leadership, was “exacerbating Venezuelan nationalism over a confrontation which is not our own.”

The Colombian military said it attacked the guerrilla camp with missiles launched from Colombian airspace, and that afterward soldiers crossed the border to retrieve some of the bodies, as well as computers and other evidence.

The Colombians’ entry into Ecuadorean territory triggered angry responses from Ecuador and Venezuela; both ordered troops to the border and withdrew their ambassadors from Colombia.

Reached by telephone in the Colombian province of Putumayo, near the border with Ecuador, Father Julio Cesar Urbano said things were calm, but tense.

“In some parts, people are afraid … of reprisals from one side or the other,” he said.

Political observers speculated that the guerrilla leader’s killing could complicate efforts to negotiate the freedom of some of the hundreds of hostages held by the guerrillas. The Catholic Church had acted as a mediator between the government and guerrillas, until being marginalized by the involvement of President Chavez, who is widely seen as sympathetic to the guerrillas’ cause.

Others suggested that the guerrillas were near defeat.

Retired Bishop Fabian Marulanda Lopez of Florencia, secretary-general of the Colombian bishops’ conference, called Reyes’ death “a hard blow” for the guerrillas and said he hoped the FARC would have “a sensible reaction” and not carry out reprisals against the hostages, but instead return to negotiations.

Some analysts suggested that President Chavez was exploiting the episode to distract attention from domestic problems, including high inflation and the scarcity of some food staples.

Analysts also predicted that the episode would wind down, because the neighboring countries are highly dependent on each other economically. For example, Archbishop Luckert pointed out that most agricultural workers in Venezuela’s Zulia state are Colombians, and that if they returned home farming “would become paralyzed.”