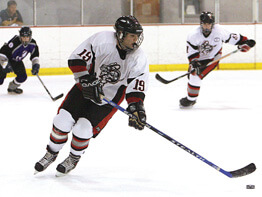 “We have a young team and we were a little shell-shocked in the first eight to 10 minutes of play,” said Moeglein on the 6-2 loss as the Cavaliers were unable to get off a shot in the early portion of the contest.

But despite falling behind 3-0, the Cavs stayed focused and relied on character to fight back with goals scored by junior winger Steve Alfano, the team’s leading scorer and center Tory Holland to cut the lead in half before the Gael’s sixth and final goal was scored with 10 seconds remaining in the game.

The Cavs took the loss in stride, recognizing just how far the Severn program has come. “I remember when we barely had enough players to field a team,” Moeglein said. But the program has remained steady over Moeglein’s six-year tenure and in fact has taken the next step by adding a junior varsity squad this season.

Cavalier defense is led by senior co-captain Sean Wilen and junior co-captain Pat Joyce, both excellent team leaders. Junior Zach Miller also anchors the defense with a quick stick and a strong physical presence, teaming up with Joyce in the transition game.

Sophomore center Alex Crofoot has been a big assist player this season and stays well-positioned for the set-up. Second-line senior John Long has also been a top contributor to the team while first-line sophomore Andy Bieler has been “fearless” on the ice, fueled by boundless energy to keep the team in every game. Moeglein refers to Bieler as the team’s sparkplug and has been a nice surprise this year.
For Moeglein what matters is the squad playing together as a team. “For me it’s character over talent. It’s hard to win without the focus on team.”

The Cavs fall to 4-1 in MIAA “A” Conference action behind the undefeated Gaels.