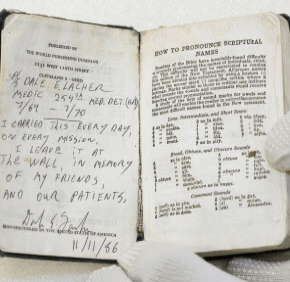 The men and women he sees describe a sense of hopelessness, helplessness and lack of meaning in life, he said.

Some are straightforward, and tell him they are thinking of hurting themselves.

As a chaplain for the Veterans Affairs Maryland Health Care System, Father Ochu works closely with the agency’s local mental health professionals to help at risk veterans, he said.

Suicide rates are high among veterans and active military members. On average, approximately 18 American veterans take their own life each day, according to the Department of Veterans Affairs.

While the rates among veterans have held steady since 2005, according to the VA, rates are climbing among active military men and women.

In early June, the Department of Defense reported the suicide rate among active military men and women is nearly one per day, with 154 suicides for active-duty troops in the first 155 days of the year – an 18-percent increase from the same period last year, according to Associated Press reports.

“We are deeply concerned about suicide in the military, which is one of the most urgent problems facing the department,” said Cynthia Smith, a Defense Department spokeswoman, via email.

Both the Defense Department and VA have launched new suicide prevention programs in recent years, and the Archdiocese for Military Services USA is expanding upon the military’s efforts.

Bishop F. Richard Spencer, an auxiliary bishop of the Archdiocese for Military Services USA who was ordained a priest of the Archdiocese of Baltimore in 1988, said Masses in his vicariate – which includes chapels on bases in Europe and Asia – add an intention in the Prayers of the Faithful for those who are depressed or contemplating suicide.

“The vocal awareness of these prayers sends the message that we are concerned and aware that suicide is a problem within our communities and we are all responsible to take care of the needs of one another,” he said via email.

Base chapels also build on the military’s large-group suicide awareness sessions with interactive small groups “that engage people to talk, and not just passively sit and listen,” he said.

According to Smith, the Defense Department has recently increased its number of behavioral health care providers, developed a suicide risk training program, and is undergoing the largest study of metal health risk and resilience ever conducted among military men and women, which is expected to be completed by 2014.

The military is also adopting a fitness model that gives equal attention to mental as well as physical fitness, and military leaders throughout the chain of command are asked to create a climate that supports military men and women seeking help, Smith said.

In Veterans Affairs, a current suicide prevention initiative summarizes that idea in a slogan: “It takes the strength and courage of a warrior to ask for help.”

“Military training is based on strength and courage, and I think there is a stigma in mental health treatment,” said Nikole Jones, a Veterans Affairs Maryland Health Care System suicide prevention coordinator. “We want our veterans to know that seeking mental health treatment means that you’re being proactive.”

The Defense Department and Veterans Affairs are teaming up for some prevention programs, including a smart phone application launched last year that offers resources and strategies for managing post-traumatic stress disorder.

Although research shows a correlation between PTSD and suicide, veterans consider suicide for a number of reasons, Jones said.

The Defense Department and Veterans Affairs use a national suicide helpline developed by the Substance Abuse and Mental Health Services Administration, 1-800-273-TALK, where military or veteran callers are directed to clinicians in their area who can connect them with local resources.

The VA Maryland Health Care System also does a variety of community outreach work to reach veterans who may not be connected to its services, and clinicians follow at-risk veterans through their care and coordinate the help they need as quickly as possible, Jones said.

As a priest, Father Ochu takes into account a person’s body and soul when counseling and takes cues from how the veteran presents his or her belief system when talking about matters of faith, he said.

“I always try to see the person as a child of God, and then from that point of view, I start to bring in my own counseling skills,” said Father Ochu, who is pursuing a doctorate in pastoral counseling at Loyola University of Maryland in Baltimore.

“Sometimes I also see suicide as a sickness of the soul,” he said.

The VA Maryland’s suicide prevention program takes “a holistic approach,” and Father Ochu is encouraged by the lives he sees it saving, he said.