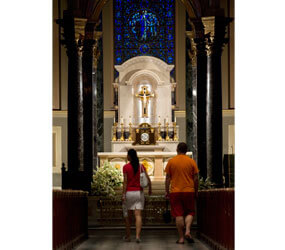 PHILADELPHIA – When Nancy Frankowski walks to church, she is confronted with scaffolding covering much of her beloved Cathedral Basilica of Sts. Peter and Paul so that workers can refresh the exterior of Philadelphia’s 147-year-old Catholic structure.

While it’s a temporary eyesore, the Philadelphia Catholic says she is looking forward to seeing the building restored to its original grandeur. She is also looking for a renovation of sorts for the Archdiocese of Philadelphia when it welcomes Archbishop Charles J. Chaput, formerly of Denver, who succeeds the retiring Cardinal Justin Rigali Sept. 8.

A fresh face at the helm may provide the spiritual lift that is needed in an archdiocese that has been rocked by a child-abuse scandal and indictments, Frankowski said following a 12:05 p.m. Tuesday Mass. “I think it will be good for Philadelphia.”

A change in leadership can provide a psychological boost to every diocese and archdiocese, said Father Dennis Gill, director of the Office for Divine Worship in the Archdiocese of Philadelphia.

Archbishop Chaput’s appointment to Philadelphia comes as the archdiocese is still reeling from a scathing grand jury report released in February. It accused the Philadelphia Archdiocese of failing to stop priests from sexually abusing children even after a previous report had called attention to problems. It said more than three dozen priests with allegations of sexual abuse were still in positions where they could contact children.

At the grand jury’s recommendation, two priests, a layman and a former archdiocesan priest were charged with criminal counts related to abuse of juveniles. Another priest was charged with endangering child welfare for his role in assigning the accused priests.

In response, the Philadelphia Archdiocese has taken actions that include hiring a former sex crimes prosecutor to review personnel files of the 37 priests named in the grand jury’s report. Cardinal Rigali also placed more than two dozen priests on administrative leave while allegations against them are reviewed.

“It has been a very difficult period, that’s true,” Father Gill said. “There’s been a lot of pain, in so many different ways during this period.”

A different leader will also provide a fresh perspective when dealing with the challenges that face the archdiocese, said Michele Meiers, an administrator for the Pontifical Mission Societies in the Archdiocese of Philadelphia.

Meiers said employees throughout the archdiocese have expressed excitement about the changing of the guard.

It’s not that they have been unhappy with the leadership of Cardinal Rigali, but a change at this time offers everyone a clean slate, she said.

“There is a hope that with someone who is new, things will be different and things will be better,” Father Gill said. “I’m sure that is residing in the hearts of many of the people who have suffered and have borne very personally and deeply the pain of our troubles over the past couple of years.”

Even Catholic dioceses that are not in the midst of scandal and are led by much-beloved leaders experience jubilation when a new prelate is welcomed.

A new bishop will not solve all of the problems facing a diocese or archdiocese, but offers rejuvenation of energy that excites the base, Father Gill said.

“It’s something that is part of the constitution of the church that we will always have bishops, shepherds to guide and keep us in the way of Christ,” he said. “The newness is the new person. The ministry remains the same.”