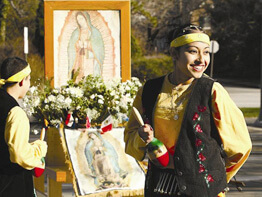 Dressed as the Indian peasant St. Juan Diego, who was visited by the Blessed Virgin Mary nearly 500 years ago, 2-year-old Brian Balbuena of Westminster helped several hundred Maryland Hispanics celebrate the annual Mass for Our Lady of Guadalupe Dec. 10 at the Cathedral of Mary Our Queen, Homeland.

The child carefully studied the rest of the costumed participants of the procession making their way to the altar of Baltimore’s Cathedral with a portrait of the Virgin Mary and colorful flowers, and listened to the beating drum that echoed in the vast chamber.

“He’s so excited,” said the child’s mother, Herminia Balbuena, a parishioner of St. John, Westminster. “This is good for him. He can be a part of something that is so important in our culture.”

Bishop Felipe de Jesus Estevez of Miami, who concelebrated the Mass along with Cardinal William H. Keeler and Bishop Mitchell T. Rozanksi, eastern vicar and vicar for Hispanics, said the unseasonably warm temperatures could remind the more than 800 in attendance of the climate in Latin countries where the majority can trace their heritage.

“What is significant about this is it happened at a time when millions of Native Americans were not responding to (Catholic) evangelization from their Spanish invaders,” said Bishop Estevez, referring to Our Lady of Guadalupe’s appearance to St. Juan Diego on Tepeyac Hill near present-day Mexico City on Dec. 12, 1531. “That appearance was a breakthrough. It brought millions into the faith, because it happened in the Americas.”

A Cuban immigrant himself, Bishop Estevez believes the annual celebration is especially important to Hispanics living in the United States, because it allows them to embrace their heritage and pass the tradition onto their children.

Though Ms. Balbuena’s family has celebrated the feast of Our Lady of Guadalupe each of the eight years they have been in the United States at their home parish, it’s the first time they participated in the archdiocesan event, which is in its 16th year of uniting Hispanics throughout the Archdiocese of Baltimore.

“My son was born in this country and he should be proud of that,” Ms. Balbuena said. “It’s also important to share the traditions of my country with my son, because that is his culture too.”
Speaking in Spanish, Cardinal Keeler urged parents in the congregation to consider sending their children to the Catholic schools in the archdiocese, and for the poorer members to apply for scholarships to enroll their youngsters.

The cardinal also invited Catholics with greater financial resources to contribute to the scholarship funds at the archdiocesan office of development, in an effort to allow more Spanish-speaking children to attend Catholic schools.

A reception following the Mass featured an array of traditional Latin-American dishes.
Though the festivities were on a smaller scale than events celebrated in Carlos Crespo’s native Mexico, the Millersville resident and parishioner of St. Clare, Essex, said the gathering of so many Hispanics in the cathedral made him feel at home in his adopted country.

“It’s good that we are all coming together in one place,” Mr. Crespo said. “There are so many people and we’re all enjoying it in such a beautiful place.”