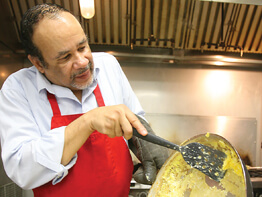 Hundreds of Baltimore black Catholics were urged to celebrate the life of slain civil-rights leader Martin Luther King Jr. by bridging the racial divide that continues to create tension among all of God’s children.

“This is an annual reminder of the racial division in our community,” said Father Donald A. Sterling, pastor of New All Saints, Liberty Heights, during his homily at a Jan. 14 Mass. “We must draw on our faith to create ethnic and racial harmony globally and in our own communities.”

The Mass preceded The Men’s Club of New All Saints 27th-Annual Communion Breakfast.

“In Baltimore, Sunday remains the single most segregated day of the week,” said Father Sterling, as he looked into a congregation where all but two were black. “Look into your ministry and be willing to work with people of all colors and racial backgrounds.”

“Many will gather here in Maryland and across the nation to speak Dr. King’s words and recall his deeds, while working overtime to counter his philosophy, dismantle his progress and alienate his progeny,” Del. Carter told the cheering crowd. “I hope I don’t need to call names, but if you must know of whom I speak, look no further than our public schools, our city neighborhoods, the aftermath of Hurricane Katrina or the misguided agenda which has our young men and women dying on foreign soil.”

The best way to honor the legacy of Dr. King is to lobby city, state and national representatives for better education for minority students, affordable housing and healthcare, she said.

“In many neighborhoods it is easier for a pregnant mother to get heroin than healthcare,” Del. Carter said. “Even here – in the great state of Maryland, in her largest city of Baltimore – we send more black boys to the penal system than we graduate from high school.”

Though she said the parades held Jan. 15 in honor of what would have been Dr. King’s 78th birthday rightfully focus on his dream of racial equality, it’s worthless if the national holiday only serves to make him an icon.

Participation is required by all black citizens if they wish to experience social equality in their lifetime, Del. Carter said.

“Dr. King once said, ‘If you haven’t found something to live for, you better find something to die for,’” she said. “My father, Walter Carter, believed that. He practiced a purposeful life in pursuit of justice. I pledge my life for the pursuit of progress, justice and equity.”

New All Saints parishioner Ruth Dawkins of Liberty Heights said she plans to work with her church to battle poverty for Baltimore citizens, regardless of the color of their skin.

“It’s our job to spread Christian values to all people,” Ms. Dawkins said. “It shouldn’t matter if you are black, white, have a high-paying job, or live on the streets. God doesn’t make any distinction. Either should we.”