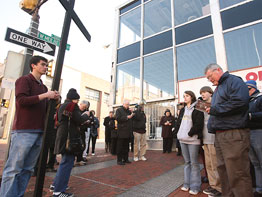 Guided by teens carrying a large wooden cross, a solemn throng of Catholics slowly processed from Shrine of St. Alphonsus in Baltimore to an abortion clinic on Howard Street March 21 to pray for women considering abortion.

Held on Good Friday, the day Christians commemorate Christ’s crucifixion, the procession included a recitation of the Stations of the Cross. Pilgrims paused several times along the route, many of them kneeling on the cold sidewalk, to mark Christ’s Way of the Cross.

Archbishop Edwin F. O’Brien led the prayers, using a bullhorn to lift his voice above the occasional din of passing busses, trains and early-morning traffic clicking over light-rail tracks.

“Almighty and ever-loving God, we feel your love and understanding in the consolation and support we receive from one another,” Archbishop O’Brien prayed at the sixth Station of the Cross. “Give us, we beg you, the courage and dedication to sacrifice and suffer with those who are in need, the least of your people.”

Once the pilgrims arrived at their destination – a Planned Parenthood facility located in a blighted section of the city near boarded-up businesses – they prayed the Sorrowful Mysteries of the rosary. A few women, some accompanied by men, entered the building as the pilgrims prayed for them.

Terry Maxwell, a parishioner of Immaculate Conception in Towson, said he participated in the service to “share the weight of the cross” with Christ and pray for women considering abortion.

“Hopefully our witness and our prayers will help those people in there today,” he said.