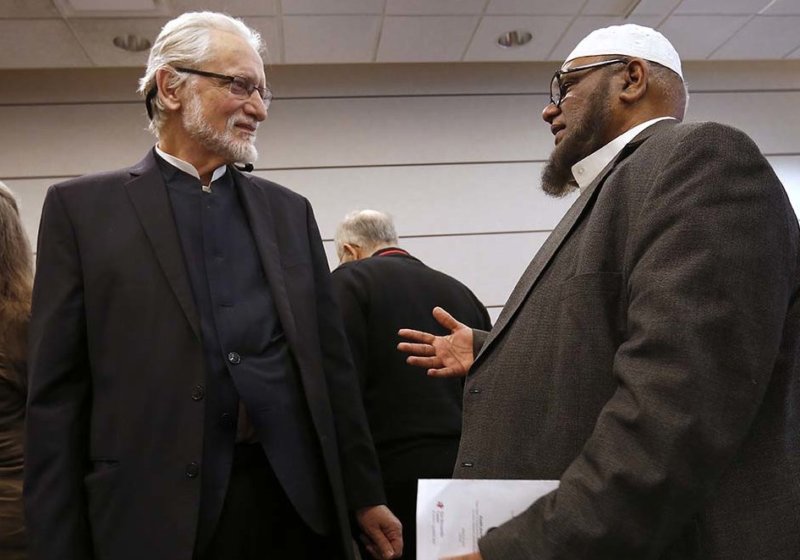 Daoud Stephen Casewit, president of American Islamic College in Chicago, talks with Sheikh Abdur Rahman Khan, co-chair of the National Catholic-Muslim Dialogue and chair of the Shariah Council of the Islamic Circle of North America, following a public session of the dialogue March 25, 2019, at Catholic Theological Union in Chicago. (CNS photo/Karen Callaway/Chicago Catholic)

CHICAGO — The way to peace runs through seeing one another as brothers and sisters, Catholic and Muslim leaders confirmed March 25 at a session of the National Catholic-Muslim Dialogue held at Catholic Theological Union.

Chicago Cardinal Blase J. Cupich joined Sheikh Abdur Rahman Khan at the session. They are the two co-chairs of the national dialogue.

Session participants were reflecting on a document on “human fraternity” and improving Christian-Muslim relations, which was signed Feb. 4 by Pope Francis and Sheikh Ahmad el-Tayeb, the grand imam of al-Azhar and a leading religious authority for many Sunni Muslims around the world. They signed the declaration during the pope’s visit to Abu Dhabi, United Arab Emirates.

“The publication of this statement on human fraternity testifies to the profound respect and friendship that exists between the Vatican and al-Azhar and it is a sign of the good that is possible between Christians and Muslims and can serve as a corrective to the false narrative that our two faith traditions are completely at odds, are fated to be enemies,” Cardinal Cupich said.

“On the contrary, we are brothers and sisters of the one, true God and the document on fraternity serves as a bridge inviting us to cross over the murky water of prejudice and fear that separates us so that we may encounter one another in a spirit of openness, trust and friendship.”

Khan, chair of the Shariah Council of the Islamic Circle of North America, recalled being a child growing up in a small village and reading about wars and fighting in the olden days.

“I would ask my mother, what about the people who were not fighting? Couldn’t they stop the wars?” he said. “I would say, ‘I wish I was born then. I would surely have put this war to its end.'”

Now, he said, he understands the question of his youth as: “Is this really what God wants us to do?”

Khan recalled the killing of 50 people at two mosques in Christchurch, New Zealand, March 15, less than six weeks after the pope and the grand imam signed the document calling for Catholic and Muslims to recognize their kinship.

The massacre also followed a litany of attacks on believers of many faiths: those at the Tree of Life Synagogue in Pittsburgh; at Emanuel African Methodist Episcopal Church in downtown Charleston, South Carolina; the Sikh Temple in Oak Creek, Wisconsin, among others; as well as attacks on minority religious groups in India, Myanmar and China.

“I think it is crisis of the soul,” Khan said. “These acts of terror have no religion, they have no color. … Human beings have lost the purpose of life if they end up with such hate. They have ignored all the teachings of their holy books and have allowed the devil to take control.”

He said the crisis is, at least in part, the fault of political leaders and dictators who seek to divide people and foment hate. People of faith must build bridges with one another and speak up.

“We can only overcome these problems if we call our politicians to accountability and call them out when they preach hate. We cannot allow ourselves to be ruled by divisive politics. We, the people of conscience and faith, must stop them in their tracks,” Khan said. “It is time our leaders show some moral courage and recognize that terrorism and violence is not a Muslim thing, but something that comes from a society that lacks understanding and compassion. It comes from anyone who has lost his soul.”

The response, he said, must be to turn to God, “because it is from him we come and to him that we should return. We should return to God for faith and strength in these trying times.”

“We must always be hopeful and never be despondent,” he said. “I stand with Cardinal Cupich, committed more than ever before to work for peace and love, and peace and love will conquer hate and evil. We must confront this evil with all that we have. May God bless us, and may God help us.”

Cardinal Cupich said there are three steps to building fraternity: establishing and nurturing dialogue, striving for cooperation in daily life, and working toward mutual understanding of one another’s beliefs and practices.

“Authentic dialogue requires that we strive to remove the barriers of pretense and subterfuge that so often accompany speech for, as I mentioned, to be in dialogue one must always reckon with the absolute dignity of the person before us as one who bears the image of the Creator,” he said. “Authentic dialogue betokens the truth of the person and is, in a word, sacred.”

Anas Malik, one of four scholars who responded to the talk, said that as a political scientist rather than a theologian, he sees the need for members of all groups to get to know those they see as “other.”

In a time of isolation and polarization, the document signed by the pope and the grand imam offers another option.

“What this does is breathes life into our social communion,” said Malik, an associate professor of political science at Xavier University in Cincinnati.

Rita George-Tvrtkovic, an associate professor of theology at Benedictine University in Lisle, Illinois, said she was struck by the language of kinship that was used in the document.

“I think brother and sister are apt terms to describe how we can relate to one another,” George-Tvrtkovic said. “We are genetically closer to our brothers and sisters than anyone else, and we live longer on this planet with them than with our parents or our children. But a good relationship with them is not a given.”