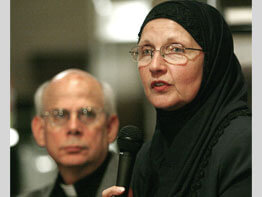 WASHINGTON – In the days following the Sept. 11 attacks, Dalila Benameur and her Muslim friends in Bridgeview, Ill., were afraid to leave their homes even when their pantries ran low and their refrigerators emptied. The women felt threatened by the handful of intimidating drivers who would cruise past the town’s mosque waving Confederate flags and shouting anti-Muslim epithets.

That’s when Andreatte Brachman and her friends from St. Fabian Catholic Church stepped in.

Ms. Brachman and company offered to accompany the women on errands as a sign of solidarity to alleviate growing concerns that Muslims hated America.

“It served almost as a bond,” Ms. Brachman said of the outreach to the Muslim women.

Of course, it helped that the St. Fabian women had gotten to know their Muslim neighbors before the attacks as part of the Muslim-Catholic Women’s Group that had evolved from the two faith communities several years earlier.

The group of 16-24 women had been meeting monthly since 1997, alternating between St. Fabian Church and the mosque in Bridgeview, one of Chicago’s southwest suburbs. Participants continue to meet every month to explore the similarities and differences in their faiths and to share their commitment to serve the less fortunate.

In their discussions the women have explored what jihad truly means to Muslims – an internal struggle to serve God – and how each religion views Jesus. For Catholics, Jesus is the Son of God and the savior of the world; for Muslims he is a wise prophet who helps reveal God. At the group’s Jan. 9 meeting, the women shared their common concern for the poor, rooted in the tenets of their two faiths, when they volunteered at a local shelter for homeless people.

“I think 9/11 taught a lesson to both communities that (interfaith dialogue) is needed, that there is a point in talking with each other,” said Benameur, a native of France who migrated to the United States in 1995 and serves as dean of students at Universal School, a Muslim-run academy in Bridgeview.

The women’s group is one example of numerous initiatives nationwide that have attempted to close the Catholic-Muslim divide. Some initiatives exist on a more formal level while others have been organized as one way to build bridges among people of the Abrahamic faiths, including the Jews.

Despite major theological differences – especially related to the divinity of Christ – such efforts have led Catholics and Muslims to see that there are enough similarities related to daily prayer, fasting, concern for others and respect for human life that can bring together members of both religious traditions. The initiatives also have explored connections between stories in the Bible and the Quran, the sacred book of Islam.

Three official Catholic-Muslim dialogues have been occurring since the 1990s: on the West Coast, in the Midwest and in the mid-Atlantic. These annual meetings have been sponsored by the U.S. Conference of Catholic Bishops and Muslim leaders, particularly the Indiana-based Islamic Society of North America and the Islamic Circle of North America in New York.

The dialogues have explored various topics including daily prayer, the stories of Abraham and Joseph in the Bible and the Quran, the depiction of Islam within Christian fundamentalism and the different understandings of divine revelation. The discussion on divine revelation led to the 2006 publication of “Revelation: Catholic and Muslim Perspectives” by USCCB Publishing, about how God is revealed in the modern world.

Father Francis Tiso, associate director of the U.S. bishops’ Secretariat of Ecumenical and Interreligious Affairs, said emphasizing the common beliefs and shared values in the dialogues is fruitful, but just as much can be learned by participants acknowledging and discussing differences.

“When dialogue is about differences there is a certain high relief that emerges that enables both sides to appreciate one another precisely for the differences,” said Father Tiso. “There’s an appreciation process … when you really listen to the other side, what they’re really saying or trying to communicate.

“(There is) the beauty of difference, the power of difference. There have been times when I have had the impression that a certain dullness creeps in when we only emphasize commonality,” Father Tiso said.

The road to dialogue opened during the Second Vatican Council, when church leaders began outreach to non-Christian religions, especially Judaism, by adopting the Declaration on the Relationship of the Church to Non-Christian Religions (“Nostra Aetate”).

As dialogue between Jews and Catholics grew during the 1970s and 1980s, similar efforts began to include Muslims. By 1985, a formal dialogue emerged in New York under the leadership of John Borelli, who today is special assistant to the president for interreligious initiatives at Washington’s Georgetown University and one of the country’s foremost experts in Catholic-Muslim relations.

Dialogue efforts got a boost when “many bishops were taking note of the many Muslims around town,” Mr. Borelli said. Eventually, Borelli began working in the Secretariat of Ecumenical and Interreligious Affairs, coordinating various programs to promote Christian-Muslim dialogue built around shared beliefs and values.