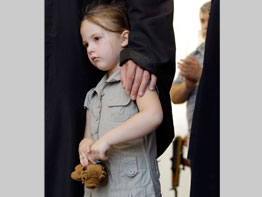 OXFORD, England – The Vatican’s diplomatic representative to Georgia said the Catholic Church would help mediate a peaceful solution between Georgia and Russia if asked.

“We are always ready to consider a request for mediation and to offer our services,” said Archbishop Claudio Gugerotti, papal nuncio. “But the parties have to want this, and so far no one has asked anything of us.”

Noting that times are tense, he spoke with Catholic News Service by telephone from Georgia Aug. 21. “The international atmosphere is colder now, and the current rigidity and insensitivity don’t favor peace,” he said.

“But I’ve called on the international community not to abandon Georgia. Although there’s been no direct reaction to my appeal, there has been an enormous show of solidarity, which Georgians are grateful for,” the archbishop added.

He said that “whole Catholic communities have been displaced – the problem now is to organize humanitarian aid properly and help reintegrate refugees.”

Archbishop Gugerotti said many ordinary Georgians had “voiced happiness and consolation” at recent statements by Pope Benedict XVI, including the pope’s Aug. 17 appeal for humanitarian corridors.

The nuncio told CNS he had received a “kind welcome” during a visit to Gori, Georgia, Aug. 19, but his requests to inspect humanitarian needs in the separatist region of South Ossetia had not been answered.

Conflict in the East European nation erupted Aug. 7 when Georgia launched a military assault to regain control of Moscow-backed South Ossetia, triggering a counteroffensive by Russian troops, who advanced deeper into Georgia. After a cease-fire was signed between Russia and Georgia, there has been little sign of a large-scale withdrawal of Russian troops.

Diana Petrosian, a Catholic economist in the Georgian capital, Tbilisi, told CNS Aug. 20 that Catholics had fled villages around Gori to escape Russian bombing and were being barred from returning home at Russian army checkpoints.

She added that people in Tbilisi faced food shortages and other hardships because Russian troops were still blocking a strategic east-west highway linking the capital with the Black Sea port of Poti.

“Communications and Internet links have been blocked and flights canceled, and there’s been panic among people here at talk of a Russian advance on the city,” said Ms. Petrosian.

She expressed disappointment over reaction from the international community.

“These disputes should have been settled by negotiation and agreement, not by force. Everyone knows Russia can exert power against a small country like ours,” she said.

Bishop Giuseppe Pasotto, who is based in Tbilisi as apostolic administrator of the Caucasus region, told the Rome-based AsiaNews agency Aug.18 that paramilitary groups, including Chechens and Kazakhs, had arrived in Gori “under the indifferent eyes of Russian soldiers.”

He said many local Christians had been sheltered by families outside the area after “living in terror.”

Pope Benedict sent a check for $125,000 to Bishop Pasotto, said an official at the Pontifical Council Cor Unum, which distributes papal charity.

Bishop Pasotto also discussed the efforts of Caritas Georgia in the area, saying that at least 70,000 refugees were being cared for at 200 reception points in Tbilisi. Caritas Georgia is the local affiliate of the international umbrella group of aid agencies, Caritas Internationalis.

The head of Caritas in Tbilisi, Father Witold Szulczynski, said it had taken Caritas staffers several hours to get to the Gori region Aug. 21 with a truckload of aid. He said people had been very pleased when the aid finally arrived and was distributed because they were “cold and hungry.”