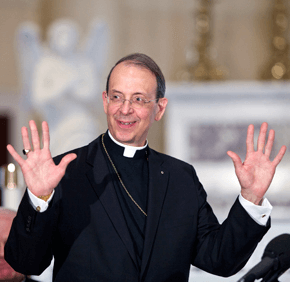 When Baltimore priest Father William P. Foley last saw his friend Archbishop William E. Lori, he said, “You know, the next time I see you, you might be my archbishop.”

“Well, you were very providential,” Archbishop Lori told Father Foley following a March 20 press conference at the Basilica of the National Shrine of the Assumption of the Blessed Virgin Mary in Baltimore, where several hundred people gathered to welcome Archbishop Lori as the new leader of the Premier See.

Father Foley, coordinator of pastoral care for retired priests, said he met Archbishop Lori at St. Mary’s Seminary in St. Mary, Ky., in the 1960s, when he was in the college department and Archbishop Lori was in the high school program. He recalls studying Latin with the archbishop in “the heartland of Catholicism” and still has a yearbook from that time, dating back 43 years.

He described his friend as a “dedicated priest with a great love for the church,” and said that on the first night of his appointment becoming public, the archbishop was hosting a dinner for retired priests.

During the press conference, Archbishop Lori said he is “very much looking forward to working together” with auxiliary bishops Mitchell T. Rozanski and Denis J. Madden.

“I think he will make a wonderful leader,” Bishop Madden said. “He’s a great listener in the sense that he really listens, he’s not just hearing the words. He’s very pastoral and prayerful, and that will be his foundation. He is also a man who has a great capacity for work.”

Bishop Madden said one bishop builds on the work of another.

“I thought Archbishop (Edwin F.) O’Brien courageously looked at schools, and all of this will be a great service to Archbishop Lori.

“I’m really happy for Archbishop Lori,” Russell said. “I think it’s a wonderful honor for him and for the Archdiocese of Baltimore. I have been so impressed in working together with him on the Ad Hoc Committee on Religious Liberty with his grasp of the important issues before us and his understanding of the importance of addressing those issues in a manner worthy of the church, with both respect and passion and love.”

Catholic schools superintendent Barbara McGraw Edmonson and other members of the archdiocesan executive leadership team met with Archbishop Lori earlier in the morning and gave him an overview of their departments. The meeting was helpful, Edmonson said. “It just gave us a little bit of time to see him as the man Archbishop Lori, and just to listen to his story and how excited he was, and honored and humbled,” she said.

She also spoke on March 20 with her counterpart in the Diocese of Bridgeport, Superintendent Margaret Dames, who has always praised Archbishop Lori’s strong support for Catholic education, and described him as a “champion for schools,” Edmondson said. Under his leadership, 12 Catholic schools in the Diocese of Bridgeport earned the U.S. Department of Education National Blue Ribbon designation.

Transitional Deacon Jaime Garcia from Mount St. Mary’s University and Seminary, where Archbishop Lori is a 1977 alumnus, said that even though the archbishop isn’t from here, “it is like having a son of the archdiocese who is coming home.”

“It will be great to have him guide Baltimore,” said Rev. Mr. Garcia, noting that it speaks well for Mount St. Mary’s reputation. “It’s a good thing the Mount is producing and educating good priests who are later going on to serve as bishops,” he said.

Sulpician Father Thomas R. Hurst, president-rector for St. Mary’s Seminary and University in Baltimore, described it as a “wonderful” appointment.

“He knows seminaries and he’s well acquainted with the contemporary issues the church has to face both internal and within society,” he said. “He brings years of pastoral experience, not only as bishop of Bridgeport, but also as vicar general and moderator of the curia.”

“I am very pleased with the appointment of Archbishop Lori, one of the premier leaders of the Catholic Church on matters regarding child protection,” said Alison D’Alessandro, director of the Office of Child and Youth Protection for the Archdiocese of Baltimore.  “Archbishop Lori, who was instrumental in the development of the USCCB’s Charter for the Protection of Children and Young People, has demonstrated a steadfast commitment to creating safe environments for children and to promoting healing for those who have been harmed by representatives of the church. We are grateful that Archbishop Lori will join the faithful of the Archdiocese of Baltimore who continue to promote a culture where the protection and safety of children is always of the utmost importance.”

D. Scott Miller, director of the Office of Youth and Young Adult Ministry for the Archdiocese of Baltimore, heard the news on his way to the office.

“I’m excited,” said Miller, who has worked with Cardinal William H. Keeler and Cardinal O’Brien. “I think we’ll continue in the long line of great teachers to serve the entire church and especially our young people.”

Dominican Sister Philip Joseph Davis, director of Academy Advancement at Mount de Sales Academy in Catonsville, said she was familiar with Archbishop Lori’s leadership before his appointment to Baltimore, describing him as a good friend of her community, the Dominican Sisters of St. Cecelia, based in Nashville, Tenn.

Nathan Ball, a 26-year-old  student of The Peabody Institute of The Johns Hopkins University , who attended the 12:10 p.m. Mass celebrated by the archbishop said the new leader struck him as “confident.”

“I’m excited to see what happens,” he said. “We’ve been praying for a long time, and I know Pope Benedict [XVI] is an amazing man, and I think the fact that he chose him, there’s a reason for it.”

Mark Pacione, associate director of the Office of School Planning for the Archdiocese of Baltimore, said he was aware of the archbishop’s work in Washington, D.C., and recently read his article in America magazine.

“I don’t think Catholics have ever been accused of being obnoxious, but we can’t be quiet, so I admire him,” Pacione said.

He said he knows there is so much for the new archbishop to learn about Baltimore and said, “I’m sure he’ll do that with great earnestness and vigor, and we’re happy to have him.”

Maria Wiering and Christopher Gunty contributed to this article.

See how some people in ministry feel about meeting Archbishop Lori in the video below: