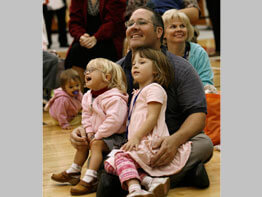 DEKALB, Ill. – Catholics from across the Midwest got a chance to rub elbows with their favorite personalities from the Eternal Word Television Network during the EWTN Family Conference in DeKalb Oct. 4-5.

The theme of the gathering, held at the Northern Illinois University Convocation Center, was “Called to Conversion in the Year of St. Paul.”

Speakers included the hosts of several popular shows on the network such as Raymond Arroyo, Marcus Grodi, Jesuit Father Mitch Pacwa and Father Benedict Groeschel, a Franciscan Friar of the Renewal.

Rounding out the weekend were a special “Life on the Rock” program with students from the university’s Newman Center Oct. 4 and an Oct. 5 children’s concert with “The Donut Man” and his puppet Duncan.

“The Donut Man” is a Catholic singer and storyteller whose real name is Rob Evans. His motto is: “Life without Jesus is like a doughnut; there’s a hole in the middle of your heart.”

Attending the conference was “even better than meeting country singers,” said Mary Julius of St. Thomas Aquinas Parish in Freeport.

“I needed a thrill. It’s really something special,” Ms. Julius told The Observer, newspaper of the Rockford Diocese.

“I came because this is as close as EWTN comes for us,” said her sister, Barbara D’Anca of Wheaton.

The weekend was filled with little reunions and discovering connections with members of EWTN, whom viewers consider to be family.

The family feeling goes both ways, according to Brother Paschal Mary Yohe. In his work at the network, he said, “it’s easy to forget that people are actually watching.”

EWTN’s president, Michael Warsaw, agreed that the free celebrations, held in various locations since EWTN’s 25th anniversary in 2006, are a boost to viewers and staff alike. “We talk about it for weeks afterwards,” he said.

In the homily at Mass Oct. 4, which was the feast of St. Francis of Assisi, Father Anthony Mary Stelten noted the day was dear to the Franciscan Missionaries of the Eternal Word, which is his order.

St. Francis was “filled with a burning desire to tell all people of the world about God’s love for them,” he said. “That’s the mission of EWTN.”

Rockford Bishop Thomas G. Doran celebrated Mass Oct. 5. He is well-known to EWTN viewers for a series on the Catechism of the Catholic Church that he did for the network.

His homily was about “family.” He began with the root of the word that means “those in the service of the good for one another” and continued with the many threats against the family in the world today, and how to find Christ’s peace even in the face of such threats.

At the end of the Mass he encouraged the congregation to continue their reverent reception of the Eucharist and to be sure to teach their children to pray because “their prayers are precious to God.”