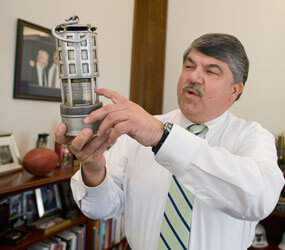 WASHINGTON – Richard Trumka, head of the AFL-CIO, the nation’s largest labor federation, said that his Catholic upbringing gave him a sense of fairness and justice that carries over into his work today.

“It taught me about the family and the family unit, and about sticking together,” he added. “It also taught me about the importance of perseverance. Just because you don’t succeed at first doesn’t mean that you should quit or allow yourself to think that it’s all over. It teaches you to keep coming and to keep working hard and to persevere.”

Trumka said, “It also taught me that we have to help others.” Here’s how he sees that in the context of his role as AFL-CIO president: “In this position I have more of an opportunity to help people get ahead and get a fair shake, to get a job, to get fair treatment, than I would have anywhere else. And that’s exciting.”

He believes the church should work harder to protect worker rights and guard against abuses at its own institutions, particularly in light of a set of principles recently agreed on by leaders from Catholic health care, the labor movement and the U.S. Catholic bishops’ conference designed to ensure a fair process for health care workers to decide whether or not to be represented by a union.

“John Sweeney (Trumka’s predecessor as AFL-CIO president) worked very, very hard with the Catholic Church, and I believe the Catholic Church – my church – ought to be a leader in human rights, which include workers’ rights,” Trumka said, adding that church institutions shouldn’t engage in “outrageous conduct” such as harassing workers who want to organize.

“I would hope the Catholic Church would be the living, shining star of the best practices,” he said.

Trumka, 60, the Polish-Italian son of a mine worker, went into the mines himself while still a teenager, but went to college and law school and became the United Mine Workers’ president in 1982. In 1995, he became secretary-treasurer of the AFL-CIO, a post he had until he ascended to the presidency last year after Sweeney’s retirement.

He predicted passage of the health care bill, although he was somewhat early. The Senate bill was approved by the House late March 21. President Barack Obama signed it into law March 23.

“It won’t be the bill we would have written if we were writing the bill. It would’ve had a public option in it,” Trumka said. Still, “it’ll give millions of people health care they didn’t have. It’ll give protection for pre-existing conditions,” he added. And the new law “won’t be the end,” Trumka predicted. “It’ll be the beginning.”

The Employee Free Choice Act has been seen as labor’s top priority in the current Congress, although the health care debate pushed it aside. The measure, as currently written, would allow workers to form unions when more then half of them at a workplace sign union representation cards, and impose mandatory arbitration if first-contract talks last a year without a pact.

What makes the bill so vital to labor interests is that “the system is broken. It denies workers a free choice, and it must be fixed,” Trumka said, rattling off statistics that underscored his argument.

In 63 percent of organizing drives, employers interrogate workers, Trumka said. In 53 percent they threaten workers, he said, and in 34 percent employers illegally fire someone. He also cited a poll last year suggesting that 60 million U.S. workers would join a union if given the opportunity. “But they won’t get that opportunity, because the system is broken,” Trumka said.

The main issue facing union and nonunion workers alike is jobs – or the lack of them, according to Trumka.

Trumka criticized the lack of a national industrial policy. “If you look at what’s been happening over the last several years, we’ve been shedding all the high-tech jobs and manufacturing jobs,” he told CNS. “We’re losing our edge in the sector of R&D – research and development – we’re losing our edge in capacity. We’re losing our capacity to make many of the things we need right now, not only for national security but for normal ways of life.”

“The lack of jobs is the first issue,” he added. “The second issue is just like it: How do make a job a good job? You make it a good job by unionizing and having collective bargaining, so that the profits made from those workers is actually shared more equitably.”