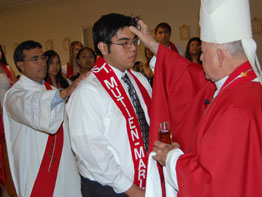 ELDORADO, Texas – As the crow flies, the Yearning for Zion Ranch is about eight miles from the bell tower at Our Lady of Guadalupe Church, tucked just inside the city limits of Eldorado in west Texas.

One can, in fact, stand outside the front doors of the Eldorado Catholic church and see the tops of the glistening spires and steeples that jut up to the north from the temple of the Fundamentalist Church of Jesus Christ of Latter-day Saints, known by locals as the FLDS, on the ranch.

Despite their proximity, the chasm between the two religions has seldom been so evident as it was the evening of May 21, when 10 youths from Our Lady of Guadalupe and St. Peter, the parish mission church in nearby Mertzon, received the sacrament of confirmation.

Their journey on the sacramental road, the young people will say, was not unlike the road traveled by their peers in other parts of the state or country.

However, the news of what may be occurring at the ranch, run by a polygamist sect, and the resultant horde of media that descended on the town offered insights few other confirmation candidates will likely ever experience.

“I don’t agree with a lot of what they do, in particular multiple marriages and the other things they have said may be going on,” said 16-year-old Timothy Cuevas, “but I must be religiously tolerant of others.”

On April 3, state law enforcement personnel raided the ranch and removed 460 children after a domestic abuse hot line received a call that underage girls there were being forced to marry much older men. The original caller was never identified, but the state dispersed the children to foster care facilities around the state.

“The children need to be helped,” Timothy said in an interview with the West Texas Angelus, newspaper of the Diocese of San Angelo. “It makes me sad that the kids are going through this and have been so isolated from the outside world. As Catholics we need to help the FLDS as much as we can.”

Help has come in the form of a $55,000 check from the San Angelo Diocese to the various centers that are housing the children removed by Child Protective Services authorities.

Of the $55,000 donated, more than $30,000 has come from parishioners at the 68 churches in the diocese; another $25,000 was received through a grant from the Catholic Church Extension Society.

Smaller individual efforts have cropped up near and far. Not surprisingly, locals have helped the women and children of the compound even though most Eldoradoans have never had any contact with any of those who live, or lived, at the Yearning for Zion Ranch.

Stef Sullivan, a parishioner at Our Lady of Guadalupe, said when she recently celebrated her 40th birthday on the same day as her son’s second birthday, instead of bringing gifts for the two of them, she encouraged the almost 50 partygoers to bring items for the ranch’s children. More than 200 items, including 131 books and 59 packages of socks, were brought to the party and subsequently sent to the children.

Examples of community such as the generosity displayed at the Sullivans’ birthday party was what San Angelo Bishop Michael D. Pfeifer, stressed in his homily during the May 21 confirmation Mass.

“Some of us see God differently,” Bishop Pfeifer told the confirmation candidates and the 100 or so family and friends attending the Mass, “but together we all form one community, a family of God.”

“The community of Eldorado has not only been in the spotlight locally and around the state but also nationally and internationally,” he continued.

“We must think about not only the community of this parish and the wider community that is Eldorado, but also of the community of the fundamentalist compound. We think of the many women and children in the compound that have been dispersed throughout the state of Texas and we pray for them,” he said.

The bishop thanked community members for all they have done and prayed that “all of us will do the best we can according to our ability.”

“We may have limits on our social and economic ability, but there is never any limit to our love. We must love one another, even people with whom we disagree,” he said.

While citing positive characteristics such as hard work and discipline, Bishop Pfeifer noted the fundamentalists’ practices are at odds with Catholic teachings and traditions.

Bishop Pfeifer told the faithful at Our Lady of Guadalupe that he had on a few occasions met with the women and children from the compound. Once the women realized the bishop was not going to arrest or move them, they became more comfortable and open to his show of concern, love and prayer.

Although Father Joseph Vathalloor, parish priest at Our Lady of Guadalupe, said the national media used the church’s parking lot as a staging area, Alexandria Suarez, 16, a student and confirmation candidate from nearby Mertzon, saw the ongoing situation at the compound as no real distraction for her or other youths.

“It just made us realize and appreciate out faith even more,” Alexandria said. “The people there are always in our prayers.”

On May 23 a court ruled the state had no authority to remove the children from the ranch, but Texas child welfare officials said they would appeal the decision.