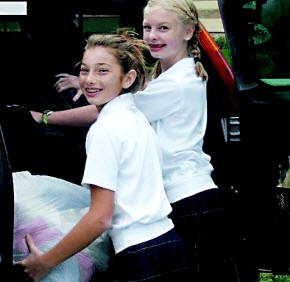 Charity might begin at home, but it’s thriving in Catholic schools in the Archdiocese of Baltimore.

She said the St. Louis School student council holds a monthly out-of-uniform and doughnut day. Recipients of funds raised have included, among others, the American Cancer Society, the American Heart Association and a sister parish in Haiti.

“We think (service) is central to our Catholic identity,” Ewachiw said. “We’re named for St. Louis IX of France and he was known for his service to the poor and we see him as our role model.”

Karen Murphy, principal of Resurrection-St. Paul School in Ellicott City, echoes that sense of service. She said teachers incorporate a monthly school “value” into lesson plans, so students hear the message from seven or so individuals. October’s value was “concern for others,” and as an outreach project, the school’s 535 students participated in a walk, raising $1,700 to help St. Paul Church house the homeless for one week this winter.

Some students, such as fourth-grader Amanda Betts, become passionate about a project and go above and beyond.
Last year the Resurrection-St. Paul student researched and gathered information about obtaining oxygen masks for pets for the Ellicott City Fire Department. School officials said she went to the fire station, created a PowerPoint presentation and fundraised $675 for 10 oxygen kits. She was honored for her efforts at an annual philanthropy day.
Assistant principal Wendy Cottrell said Amanda put forth an “amazing effort” in tying into the school’s theme of “Go into the world and make disciples.”

“We had an overwhelming amount of support,” she said. “I was floored. I think we delivered 200 coats.”

To garner support, Whiteford put together a presentation for Spanish classes, showing testimonials from the Esperanza Center website.

“It’s important for kids to understand why (they are giving),” Whiteford said.

Maureen Goyena, a mother of a third-, sixth- and eighth-grader at St. Louis School, said it does a “great job” at communicating projects, noting her two older children help the elderly with house projects and yard work twice a year.
“I’m always amazed how much gets done in a week and that there are still fresh and new ideas on how to continue in the Catholic tradition,” she said of the teachers and administration.

Murphy hopes, if nothing else, her students learn this: “No matter what we have or do not have, we always have our time, talent and treasure to give back,” she said. “It’s part of who we are called to be.