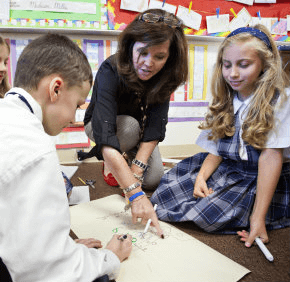 Unlike some school districts in Maryland that have experienced glitches while implementing Common Core State Standards, the Archdiocese of Baltimore’s Department of Catholic Schools is not facing the same pressures.

Catholic educators in the archdiocese, however, said it was time for a modification of its math curriculum for pre-kindergarten through eighth grade, and that it isn’t rushing the changes.

“We were due to begin our curriculum revision,” said Dr. Barbara McGraw Edmondson, superintendent of archdiocesan Catholic schools. “Our goal is to always meet and exceed those standards and benchmarks. None of this is prescriptive for us. We look to what are the standards out there nationally. We use those as a place to begin when looking at our standards.”

The Common Core State Standards are an effort by the National Governor’s Association and the Council of Chief State School Officers. The standards have been adopted by 45 states and the District of Columbia. States that adopt the standards are afforded federal funding.

The Common Core standards for math and English language arts prescribe what students in grades K-12 should know and be able to do at each grade level, with an emphasis on conceptual understanding and procedures. The standards are the foundation for the Maryland State Department of Education’s new curriculum.

About 400 Catholic elementary school math teachers in the archdiocese are using a draft of the amended math curriculum in their classrooms this year. The new curriculum, which continues to be reviewed and refined, is expected to be implemented for the 2014-15 school year, Dammeyer said.

Catholic educators are collaborating, sharing best practices and providing feedback, said Mary Destino, a fourth-grade teacher at Resurrection-St. Paul School in Ellicott City and an educator for 35 years. She is one of 40 master math teachers tasked with updating the math curriculum for K-8 schools in the archdiocese.

“It (the curriculum) is not written in stone,” Destino said. “We are developing it. … That’s the difference in the archdiocese. They didn’t say ‘here it is.’ ”

With the revised math curriculum, there is an emphasis on students articulating how they arrived at their answers, Destino said. Explaining their answers, she said, provides a “deeper understanding of what they’re doing. They need to be able to problem solve.”

During math class Nov. 4, Destino asked students, who were multiplying three digit numbers, “What were the steps we used?”

In an email to the Review, Dammeyer wrote, “The curriculum revision process refreshes and energizes teaching and learning and as part of our commitment to continuous improvement for our students, ensures that our schools are institutions of academic excellence that are rooted in the faith-based mission of Catholic education.”

“Standards are not curriculum,” Dammeyer said. “Standards are just that – standards. We look at the latest standards – national, state – and utilize those as we begin to modify curriculum. We expect every one of our schools to meet or exceed those standards.”

“We’ll move through all of our curriculum areas,” said Edmondson, who noted revisions are cyclical. “Catholic schools have long utilized standards with similarities to those used by public schools.  The difference, however, is that our schools are not only able to, but expected, to go well beyond those standards, and they must always reflect Catholic values and traditions in our schools.”