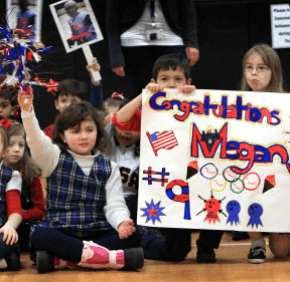 By Michelle Martin
Catholic News Service
BUFFALO GROVE, Ill. – Nick Carlino never knew that his school had fostered Olympic-level hockey talent.
Not, that is, until St. Mary School in Buffalo Grove held a Jan. 30 rally in support of 2005 graduate Megan Bozek, who will represent the United States on its women’s hockey team in Sochi, Russia.
“My goal is to play in the NHL, so this is really neat,” said Nick, an 8-year-old second-grader who plays at the “mite” level for an area hockey club.
Kayla Johnson, a St. Mary seventh-grader who plays goalie on the “peewee” level for another area hockey group, said she had never heard of Bozek until a couple of months ago. Now she wants to be like her.
“It’s pretty amazing,” she told the Catholic New World, Chicago’s archdiocesan newspaper.
St. Mary teachers and staff are hoping that all of their students – not just those who play hockey for various suburban clubs – will find a role model in Bozek, who is remembered by teachers as a happy, outgoing girl who was an excellent student.
“When other kids had tournaments, you might not even know until they were gone,” said Mary Burke, who taught Bozek in seventh and eighth grade. “She would come to me ahead of time, and if she was going to miss a Friday vocabulary test, she would ask to take it early. And when she came back, she would have all the work she missed.”
Bozek, 22, played for Team Illinois as a youth, graduated from Stevenson High School and set a scoring record for defensemen for the University of Minnesota Golden Gophers before graduating last year.
St. Mary Principal Nikki Raftery has been at the elementary school three years, so she didn’t know Bozek. But since Bozek was named to the Olympic team Jan. 1, she’s heard plenty about her.
“When people heard, everybody was talking about it, and it was in the media,” Raftery said. “People who knew her said she was always a big hockey player and an excellent student, an all-around athlete. She was somebody who would set goals and work hard to reach them. In any sport, to excel at it, you have to have determination, and she was determined to go so far.”
Bozek’s parents still live in the parish, and Raftery said the school plans to give them a video of the rally, which started with morning prayer and ended with chants of “USA! USA!” Her parents and two brothers plan to go to Sochi for the games; the St. Mary Family-School Association was among the groups that donated money to help pay for the trip.
Raftery said she hopes they can give their daughter the video before or during the games, so the whole team can see Bozek’s old school cheering for her, even though none of the students there now would have known Bozek when she was a student.
“This is somebody who shares our faith, who shares our values, who went to our school,” Raftery said. “When you see somebody actually achieve their dreams, it’s human nature to get behind them.”
Martin is a staff writer at the Catholic New World, newspaper of the Chicago Archdiocese.
Also see:
Inside sports: See why Mount St. Joseph is so passionate about ice hockey
Copyright (c) 2014 Catholic News Service/U.S. Conference of Catholic Bishops
PrevNext