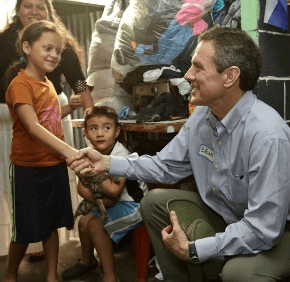 By Catholic Review Staff
Baltimore-based Catholic Relief Services has a new leader.
Archbishop Paul S. Coakley, CRS board chair, announced Sept. 16 that Sean Callahan will serve as the international relief organization’s president and CEO. Callahan succeeds Carolyn Woo, who will end her five-year term Jan. 1.
“We are pleased that this comprehensive six-month search process brought us to Sean,” Archbishop Coakley of Oklahoma City said in a news release. “He is eminently qualified as he has served at CRS for 28 years, the last four as chief operating officer and, for eight years before that, executive vice president for overseas operations.”
The board’s decision came after a presentation by its search committee, which unanimously recommended Callahan.
“Sean’s experience, faith and empathy make him ideal to lead CRS in its important, lifesaving and life-affirming mission,” said Bishop Richard Malone of Buffalo, NY, head of the CRS board search committee. “We looked all across the nation and found that the best person for the job was Sean, already working for us.”

“I am at once honored and humbled to take on this great responsibility,” said Callahan, a 56-year-old parishioner of Church of the Resurrection in Ellicott City. “Our work is so important, both around the world and here in the U.S., where our donors and partners look to CRS to live out their faith and aid the poor in God’s family, no matter where they might live.”
CRS is the international humanitarian organization of the Catholic community in the United States that supports more than 100 million people living in poverty around the world.
A native of Andover, Mass., Callahan holds a master’s degree in law and diplomacy from Tufts University, where he also received a bachelor’s degree in Spanish.
At CRS, Callahan has headed the Nicaragua program and East India office, was director of Human Resources and, from 1998 to 2004, was regional director for South Asia.
In a 2013 interview with the Catholic Review, Callahan said CRS adapts its tools and approaches to meet new challenges, but has always “saved lives, protected lives and helped transform lives.”
While working in India, he got to know St. Teresa of Kolkata, a relationship that led to her visit to CRS headquarters in 1996.
Reflecting in August 2016 on the upcoming canonization of St. Teresa, Callahan  recalled his first meeting with the future saint, attending an early morning Mass with the Missionaries of Charity. Because of his role with CRS, he had a private session with Mother Teresa after the Mass.
“I was thanking her for giving CRS the opportunity to work with her and do the great works,” he recalled in an interview with Catholic Review Editor Christopher Gunty for the radio show Catholic Baltimore. “She said, ‘Shhh, don’t spoil it. We are lucky to do this work.’ And then she went on being very generous saying CRS was the first organization to work with her when she only had 12 sisters, so she really had a special feeling for CRS.”
Callahan noted that CRS focused on reaching out to the poorest of the poor in isolated areas of the country, “either protecting, saving and transforming lives in emergencies or giving them opportunities in education, health and agriculture to generate employment.”
The work was important because it highlighted human dignity, he said, noting that Pope Francis and St. Teresa often talked about the important of not having a throwaway culture. “We particularly cannot have a throwaway culture for people,” Callahan said.
“We need to go out and reach and pull those people back up. I think Catholic Relief Services has tried to take that example of reaching out to people who have been forgotten, who have been discarded and bring them back into society and give them an opportunity.”
Callahan is the current president of Caritas North America, is on the board of trustees for Catholic Charities USA and has served on the executive committee and representative council of Caritas Internationalis, the Vatican-based confederation of 165 Catholic relief, development and social service organizations operating in over 200 countries and territories.
Callahan and his wife, Piyali, have two children, Sahana and Ryan.
Coakley said that Callahan is in an ideal position to build on the foundation put in place by Woo over the last five years.
Under Woo’s direction, CRS has set strategic priorities and broadened avenues of support for relief and development work that currently reaches 107 million people in 101 countries.  CRS’ operating expenditures will reach almost $900 million in fiscal year 2016, the highest in its history, rising from $585 million in fiscal year 2013, according to a press release.
Embracing Catholic social teaching and its Integral Human Development approach, CRS has focused its work on three areas of immense need and particular strength: emergency response, agriculture and health.
In fiscal year 2015, CRS dealt with emergencies in 46 countries, including those impacted by violence in the Middle East, where 1 million people affected by the war in Syria have received help. In addition, a large food assistance program administered by CRS helped stave off hunger for millions when drought struck Ethiopia earlier this year.
CRS’ agriculture programs emphasize a “pathway to prosperity” that turns subsistence farmers into agribusiness entrepreneurs. Some 1.2 million staff, partners and farmers received agriculture training over the last 2 years. In health, CRS provided more than 13 million people in 10 countries with malaria prevention and treatment support in fiscal year 2015.

Click here and scroll to the Aug. 28, 2016, broadcast, for the Catholic Baltimore interview with Sean Callahan.