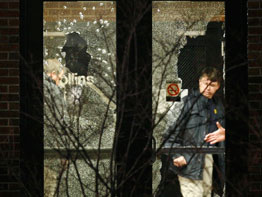 DEKALB, Ill. – As helicopters hovered noisily over the parking lot at Christ the Teacher Parish on the campus of Northern Illinois University, students, staff and parishioners gathered in the church to pray the rosary for victims of the Feb. 14 shooting on their campus.

Five students died in the shooting, which took place about 3 p.m. when a man later identified as Stephen Kazmierczak, 27, opened fire with a shotgun and several handguns in a school auditorium. He shot at least 22 people and sent dozens of students running and crawling toward auditorium exits. The gunman then turned the gun on himself and died on the auditorium’s stage.

University officials said they had no motive for Kazmierczak’s actions, but an investigation was continuing.

As word of the shootings spread across the campus, buildings and dorms were locked down.

Within hours, parishioners at Christ the Teacher Parish, home to the university’s Newman Center, brought cartons of sodas and chips to the parish in preparation for students who might come to pray or seek comfort.

Of the estimated 25,000 students enrolled at Northern Illinois University, approximately, 9,000 are Catholic. DeKalb is located in the heart of the 11-county Diocese of Rockford, which stretches from suburban Chicago to the Mississippi River.

Monsignor Glenn Nelson, pastor of the campus parish and vicar general and chancellor of the Rockford Diocese, was away from DeKalb on other diocesan duties when the news broke of the campus shooting.

He immediately returned to campus and began taking phone calls, including one from Father John Grace of the Newman Center on the campus of Virginia Tech, in Blacksburg, Va., where a student killed 32 students and faculty members in April 2007 and then took his own life.

“Father John called us to say their students are united with us and they are praying for us,” Monsignor Nelson told The Observer, diocesan newspaper of Rockford.

Last year, students and parishioners at Christ the Teacher made rosaries in the Virginia Tech colors of maroon and orange and sent them to the students there.

In an interview with The Observer, Father Grace complimented Northern Illinois University officials on “the preciseness, the professionalism, the shut down” of the campus Feb. 14. “You really see the responsiveness. We had two shootings, hours went by, then (the shooter) came back and they closed down,” he said of the April 16 shooting on the Virginia Tech campus.

Father Grace said he was confident students at Northern Illinois University would see “the power of community for each other,” as the Virginia Tech students did after their shooting.

Monsignor Nelson said the first response at Christ the Teacher was to prepare to keep the building open as long as necessary.

“We’re setting up as if for 24-hour study,” he said, referring to when the Newman Center is open 24-hours for several days during finals each semester.

Monsignor Nelson visited students on the Catholic floor of University Plaza, a private dormitory a few blocks north of the auditorium where the shooting took place. Another priest from the parish had been at the local hospital where many of the victims had been taken.

During the evening after the shooting, small groups of two or three students wandered into the church. Some joined the rosary, others shared conversation and pizza in the lounge, and still others sat before a bank of computers in a study room, monitoring the news.

On Feb. 15, the daily Mass was for the victims of the tragedy, and an ecumenical prayer vigil was scheduled for the evening.

Rockford Bishop Thomas G. Doran called Monsignor Nelson Feb. 14 and assured him of his prayers and support for his efforts and for all the students and parents involved in the unfolding crisis.

In a Feb. 15 statement the bishop said he offered his prayers for “all the souls who were murdered in this event and are now in the hands of God. They were innocent victims of a horrible crime. Our thoughts too go to the students and others who were injured and we pray that their injuries will be swiftly and surely cured.”

“We pray also for the parents of all of the students at Northern Illinois University but most especially for the parents of those who have died or were injured, that God will give them the grace of consolation in what is a terrible personal tragedy and loss,” he added.

The bishop also offered prayers for the entire university community, asking God to “give them the grace to deal with this tragedy which is almost beyond words.”