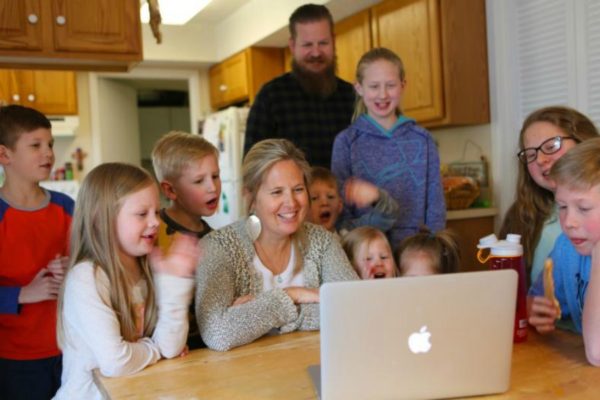 Amy and Ryan Laddbush of Bowie, Md., along with nine of their 11 children, enjoy a FaceTime call March 6 with their oldest son, who is attending college at Salisbury University in Salisbury, Md. (CNS photo/Chaz Muth)

BOWIE, Md. – Mother’s Day will greet Amy Laddbush of Bowie with plentiful sounds as her husband and 11 children clamor to express their appreciation for her vital service to their big Catholic family.

On a typical day, the Laddbushes’ modest home has a familiar hum of energetic children bustling about, and May 14, Mother’s Day, promises to have more exuberant reverberations.

“Yes, we have a lot of children and they do understand there is something special about their mother,” said Ryan Laddbush, Amy’s husband of nearly 20 years. “It’ll be a day for the family. That’s what makes my wife happy, time with her family. That’s how we’ll show her how much she means to all of us.”

The days of the distinctive big Catholic family has been waning during the past decades, but the home-schooling Laddbush brood is proof that it hasn’t completely disappeared.

Amy and Ryan Laddbush met as undergrads at Towson University in Towson, Maryland, and when they wed they knew they wanted children – but 11?

“No, this isn’t what I envisioned when I was dreaming about what my life was going to be like, but I’m not sure I really had a clear vision of what God had in store for me,” Amy told Catholic News Service during an interview at her home. “When I was pregnant with our seventh child it occurred to me, ‘oh, we’re just one of those big Catholic families now.’ It’s what we’re meant to do.”

The Laddbush children, who range in age from 19 to 1, include Ray, Josie, Brady, Sean, Evan, Bennett, Mary, Finn, Charlotte, Sloane and John Paul.

Motherhood is also her vocation.

Though Amy doesn’t necessarily equate her role as mother to that of a priest or nun, the church does.

Pope Francis has repeatedly touted the role of mothers during his papacy, saying it’s often moms who nourish the religious strength in their children.

The pope’s statement is evident in the Laddbush household, where Amy guarantees the church is the central force in their family.

The children are educated in a Catholic home-school curriculum.

Prayers and Bible readings precede all daily lessons and school work in the home, several of the Laddbush children swim on a Catholic home-school team, they go to religious education classes at a local Catholic school and attend Mass at least twice a week – and sometimes more.

Msgr. Charles J. Parry, pastor of the Laddbush family’s parish, Sacred Heart Church in Bowie, told CNS the church depends on parents to plant the seeds of the faith as they raise their children.

Amy believes the church is helping her raise virtuous and responsible citizens.

“It’s our job to raise these children to be good and kind people,” she said. “Having the church as our spiritual and moral guide is so important.”

For as much as Ryan credits Amy for her skills as a mother, she credits her husband for providing her with the support needed to raise 11 children.

In addition to being the sole income provider for the family, Amy says Ryan is a full partner in household chores, assisting in home-school lessons and teaching the faith to their children.

“We both have our strengths and our weaknesses, but we really compliment each other in our role as parents,” she said. “I can’t imagine doing this without him.”

The two also rely on extended family for help, who have watched their children throughout the years when they’ve needed time to themselves.

Once a week, the couple goes grocery shopping together and sometimes stops for an inexpensive dinner for two.

“We consider that our date night,” Amy said with a laugh. “I know some people might find that to be funny, but we really cherish that time together.”

To be good parents, they have to be a strong couple, which requires attention to their relationship, both Amy and Ryan agreed.

The Laddbushes recognize their large family sometimes draws attention when they are out in public. Occasionally they are asked if all the children are theirs – and a host of other questions.

“People often ask me how can we afford all of these children and I usually tell them we can’t,” Amy said.

Ryan later said the family does manage to stay afloat financially by being frugal and not living beyond their means.

“Our family is the most important thing in our lives and we really don’t need much more,” he said, adding they commonly forgo expensive vacations, distant travels and restaurants. “Ultimately, I think this kind of life is teaching our children the most valuable lessons.”

So, are there any more children in store for Amy and Ryan Laddbush, who are both 40?

Amy insists that only God knows the answer to that question, but she is partial to the number 12.