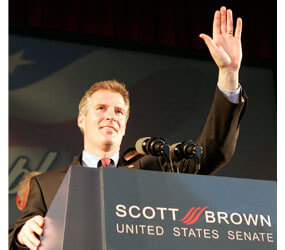 WASHINGTON – The election of Republican Scott Brown to fill the U.S. Senate seat held since 1962 by Democrat Ted Kennedy of Massachusetts does not mean Catholic leaders will abandon efforts to achieve much-needed health reform.

That was the message from the president and CEO of the Catholic Health Association and the director of the Office of Domestic Social Development of the U.S. Conference of Catholic Bishops the day after Brown, a state senator in Massachusetts, defeated state Attorney General Martha Coakley, 52 percent to 47 percent, in a special election Jan. 19.

Once Brown is seated in the Senate, Democrats will lose the 60-seat supermajority that had allowed them to cut off GOP filibustering on health reform legislation. Brown has said he would vote against the current Senate health reform plan.

“The important thing to remember is that even if they throw the bills away and abandon the effort to achieve health reform, that still leaves a lot of people hurting,” said Sister Carol Keehan, a Daughter of Charity who is the CHA’s top executive.

“The bishops are not abandoning the health reform effort,” said Kathy Saile of the USCCB. “But it clearly needs to be done in a different way (than the current bills) and we are very much interested in being a part of that conversation.”

The Democratic leadership in the House and Senate has been working to reconcile the health reform bills passed by both chambers, but the likelihood of a Senate filibuster once Brown is seated means a bill that includes some of the House provisions probably would not come to a vote in the Senate.

One possible strategy is for the House to approve the Senate version without changes.

But the bishops – who have called the Senate bill “deficient” in its treatment of abortion, conscience protection, immigrants and affordability – would strongly oppose such a move, Saile said.

“The bishops have consistently said health reform is both a moral imperative and a national priority,” she said. “That is still the case.”

Saile said the “most helpful” step at this point would be to “take a deep breath, take a step back and remember why we started the health reform process – because 50 million people in the United States don’t have health insurance and access to health care.”

“Finding a way to get something done is a very worthwhile goal,” she said. “We have to look at what is best for the country, for the people.”

While the health reform debate has been going on, “more and more people have a desperate need” for adequate health care,” Sister Carol said. “We have to find a way to come together and get health reform that is worthy of this nation.”

One is that “pendulums swing,” he said. “The American people, no matter what their political affiliation, are not comfortable with any one party holding supermajorities in Washington.”

Another lesson is the importance of elections, Father Pavone said.

“Whether the issue is health care, abortion or anything else, when the people feel powerless to change the minds of those in power, they change those in power,” he added.