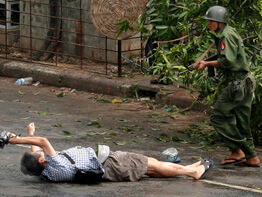 MANILA, Philippines – A Catholic woman from Myanmar living in Manila said she is agonizing over the violence erupting in her country as she watches the news reports.

She said she was grateful that people were rallying in front of the Myanmar Embassy to the Philippines to protest the crackdown on monks, students and other protesters in Yangon, Myanmar’s capital, because her fellow citizens are afraid to speak out or congregate, even outside their country.

The woman wrote her thoughts in a commentary for the Asian church news agency UCA News, which published them Sept. 28 without releasing her name.

“It seems all of us (Philippine-based people from Myanmar) are suffering very painfully and quietly,” the woman said. “We cannot move in any way because we fear our government will give us trouble here in the Philippines or give our families trouble back home.”

She said Myanmar people in the Philippines “don’t like to get together here because we are very afraid of our embassy. Whatever move we make, they will report back to Burma (the former name for Myanmar), and they can revoke our passport within an hour.”

She said she has followed cable news reports and tells her mother in Yangon about the news that she sees.

“My mother said even though they are there (in Yangon), they do not know anything because government television will not show them anything,” she said. “I am the one who is telling them what is happening.”

The woman reported seeing the picture of a Japanese journalist killed during a government crackdown on demonstrators in Yangon.

“He was lying dead on the street wearing Burmese clothes with a camera in his hand. I pity him very much. It reminds me of 1988, when they killed 3,000 in one day. It’s the same road and there are also students,” she said.

The woman said that initially soldiers “seemed hesitant to attack monks because they are Burmese Buddhist people. But later on they started using soldiers from outside Rangoon,” who did not hesitate to attack the protesters. Rangoon is the former name of Yangon.

“Imagine if they can do it to the monks, how much more the ordinary innocent people?” she asked.
International media reported that tens of thousands of Buddhist monks and others have been demonstrating in Yangon and other cities against spiraling inflation, corruption and the government’s continued suppression of democracy.

The military began its crackdown Sept. 26, after the demonstrators had reportedly swelled to 100,000 during the previous two days. As of Sept. 28, international news agencies were reporting that at least 10 people, including Buddhist monks and the Japanese journalist, had been killed in the crackdown.
Monks also reportedly were beaten during raids on two monasteries.
People from Myanmar staying in the Philippines include at least 50 priests and religious studying or doing church work.

“In the Philippines, there is good democracy and yet we cannot do anything,” the woman wrote. “We learn in Burma that we are not allowed to gather. We are not even allowed to talk about what we feel. That feeling we carry everywhere we go.”

The 2007 Myanmar Catholic Directory counts fewer than 628,000 Catholics among 47 million people in the predominantly Buddhist country.

The woman said she talked to her priest in Myanmar Sept. 27 and he said Catholics there “are holding prayer meetings in every diocese; all bishops are working to keep peace so no more violence will happen.”