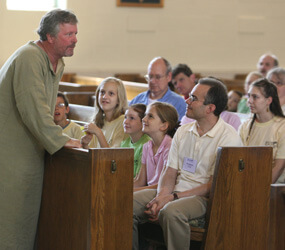 As Archbishop Edwin F. O’Brien was about to begin his homily for the Catholic Family Expo Mass June 12, he paused in front of the altar.

The people sitting in the pews of the Church of the Resurrection in Ellicott City stirred with curiosity as the archbishop dramatically prostrated himself before the altar face first. He remained there for 20 seconds as parents lifted their children to see.

He later would tell the assembled that he was calling to mind St. Paul.

Paul gave his body and mind for the mission of Jesus, said the archbishop, who encouraged attendees of the 18th annual Expo to follow that lead.

“The power of Christ is working in your lives,” the archbishop said. “Faith is a gift that Christ has given the world.”

The June 12-13 event was in its second year at Resurrection after several at the Baltimore Convention Center. It offers a series of lectures, music, fellowship and spiritual exploration. Some attendees traveled from outside the archdiocese.

Miki Hill, the event’s co-president, said it was once largely for home schooling families. It has taken on a broader approach, and popularity has followed.

“The idea is that it’s a big tent, a great church and there’s room for everybody, even though there’s one essential truth,” she said. “The goal is to send them back into their churches energized, rejuvenated and knowing more about their faith. Hopefully it deepens their beliefs.”

She said the event wanted to pay respect to the Year of St. Paul, which concludes June 29. Dr. Peter Kreeft spoke about St. Paul’s secrets to happiness, and a dramatic presentation on the life of Paul was also presented.

Speakers like Dr. Ray Guarendi addressed the power of laughter in the family. Andrew Pudewa spoke about a culture of relativism impacting the nation’s children and how it can be combated.

Adult attendees were able to freely attend a wide variety of workshops, thanks to the first day care offered at the Expo. The options for children included a youth rally that featured renowned singer Martin Dorman and Stephen Lay, music director of Resurrection.

“If we can guide these young people in their faith well and keep them strong in their faith, they’re going to take that and run with it,” Dorman said.

Sam Hajnos, 12, clapped and sang along with Matt Hill, Dominic Pileggi and John Niffert during the rally. Sam said the Catholic Family Expo allowed him to be comfortable in his faith

“I live in Westminster, so I don’t get to them (his friends) that much,” the St. John parishioner said. “This is fun.”