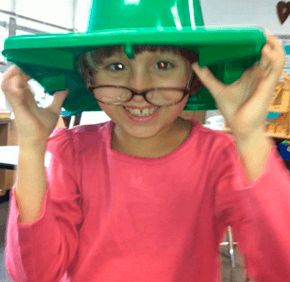 By Elizabeth Lowe
elowe@CatholicReview.org
Josephine “Joey” Gay was one of 20 children and six adults killed in the shooting at Sandy Hook Elementary School in Newtown, Conn. on Dec. 14, 2012.
“You have two choices,” said Bob Gay, Joey’s father and a 1978 graduate of Calvert Hall College High School in Towson. “You can choose love or you can go another way. Knowing my daughter, choosing love was the only way.”
The 7-year-old will be honored at the second annual Joey’s Purple Ball June 14 at Calvert Hall. The event benefits the pending non-profit Safe and Sound, comprised of Sandy Hook parents and community members who lost children, friends and loved ones in the shooting.
Joey’s mother, Michele Gay, is a co-founder of Safe and Sound.
Through Safe and Sound, Michele and co-founder Alissa Parker, whose daughter Emilie also died in the Sandy Hook tragedy, are working to educate school communities about simple and inexpensive ways to make their buildings safer, particularly during emergencies due to an intruder, the weather or a fire.
“There’s nothing political about it, divisive about it,” said Michele, a former teacher. “It’s not rocket science. It’s a matter of getting going and collaborating with others around you.”
Last year, Joey’s Purple Ball raised more than $50,000 for Joey’s Fund through the Doug Flutie Jr. Foundation for Autism, which provides grants for families with children with autism. Joey had autism and apraxia. April is Autism Awareness Month.
The Gays formed Joey’s Fund days after their daughter’s death.
“It occurred to us how big this thing was,” said Bob, 54. “We were so angry over the tragedy. I did not want that day to define my daughter’s life. She was such a sweet, precious person. We used that interest in Sandy Hook and people’s desire to help and put something together.
“It’s how you defeat evil,” he said. “There’s a lot of good in people.”
The Gays, who reside in Massachusetts, are also parents to their 10- and 12-year-old daughters.
The family’s Catholic faith has been a stronghold.
“It (the death of a child) is the worst thing that could happen to you,” Bob said. “You just rise to the occasion. It’s easier if you have faith. We knew right away she was with Jesus and that sustains us. We all want to be where she is so we live our lives accordingly.”
“It’s helped us through challenges and difficult times,” said Michele, 41, who attended elementary and middle school at John Paul Regional Catholic School in Baltimore and Trinity School in Ilchester. “I never realized what a blessing it was going to be in my greatest time of need, on Dec. 14, and all the days after.
“That day (Dec. 14) the very first place I went to hold myself together was my faith,” she said.
Lauren Esakoff, chairwoman of Joey’s Purple Ball, is inspired by the Gays.
“Their faith plays a huge role for both of them and I respect and admire that,” she said. “I see them as pillars of strength and I see the impact of their faith and how it’s keeping them going.”
Esakoff never met Joey, but she feels like she knows her.
“She is ever present,” Esakoff said.
For more information:
To purchase tickets for Joey’s Purple Ball, visit www.eventbrite.com/e/joeys-purple-ball-tickets-10156938677.
For information about Safe and Sound, visit safeandsoundschools.org.
For information about Joey’s Fund, visit dougflutiejrfoundation.org/Donate-Joeys-Fund.asp.
Also see:
Shooting touches home in Archdiocese of Baltimore
12-year-old’s wish to go to Vatican, see pope, to come true
Commentary: Cat adoption is bittersweet opportunity to be a helper
PrevNext