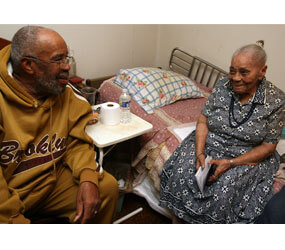 ANNAPOLIS – Dressed in a navy blue and white print dress, with matching blue pearls, her gray hair pulled into a bun, Mary McGowan looked peaceful as she read over material from St. Mary’s Church in Annapolis on a December afternoon.

Faith has always been important to the 103-year-old Annapolis resident, who attended St. Mary’s Catholic Colored School and St. Mary’s Church growing up.

McGowan’s son, 82-year-old Theodore J. Hyman Sr., and her caregiver of three years, Venessa Brown, say this strong faith has been central to her life and helps keep her going.

This particular day, McGowan was reading over the “Little Blue Book” for the Advent and Christmas season, her fingers delicately tracing over a prayer card in the book.

“This is the Blessed Virgin Mary,” she said.

For a time, McGowan walked to church. After that got to be too much, her son drove her to weekly Mass, and now she receives Communion weekly from a member of St. Mary’s Church in the house in which she cared for her mother and sisters until they passed away.

McGowan, whose 100th birthday cake was shaped like a Bible, has a drawer full of rosaries and is an avid reader of The Catholic Review.

Mary Joan Foley has been bringing Communion to McGowan for more than three years.

“She knows me now, and when she sees the pyx, she immediately blesses herself and says the ‘Our Father,’ the ‘Hail Mary,’ and the ‘Glory be to the Father,’” Foley said. “She can’t hear very well, so I hold her hand as she consumes the host, and then she sings.”

Foley said she is inspired by the simplicity of the weekly ritual.

“To me, it’s just beautiful,” Foley said. “She knows what she’s doing. I feel like I’m visiting an angel, someone very close to God. It’s a privilege for me to do this.”

“She’s proud to be a Catholic, and she loves her children,” said Brown. “She spent her life making sure they were OK, doing what she had to do.”

She said that McGowan, who never married, pressed shirts for an admiral at the U.S. Naval Academy and also worked in the laundry.

“It was hard for Mary,” Brown said. “This woman raised her kids and held her mother’s house and kept the taxes paid by doing day work. Whoever came here got taken care of. She’s a strong woman right here.

“She was educated and she did what she had to do to keep her family together,” she said.

McGowan raised four sons, one of whom was killed after 14 years of service in the military. Family is important to her, and she has a granddaughter, Glenda Anene, who visits often.

Brown said McGowan enjoys singing, reading, eating crab cakes and chocolate bars, drinking Lipton decaffeinated tea and watching television shows such as “Sanford and Son,” “The Price is Right,” and the 6 p.m. news. She is not a fan of having her picture taken.

“She loves to sing and will do it morning and night,” said Brown, adding that McGowan also talks a lot about her past.

When she first came to the home three years ago, Brown admitted she thought McGowan would sleep much of the time.

“I was not prepared for the remarkable woman she is,” Brown said.

At the end of the interview, McGowan looked up, smiled and said “Thanks for coming.”