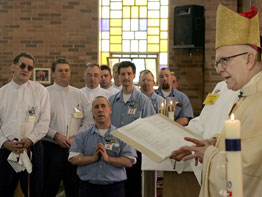 CINCINNATI – Ten inmates at Lebanon Correctional Institution north of Cincinnati experienced the sense of hope and promise of new life that accompanies the Easter season when they were welcomed into the Catholic Church March 23.

Archbishop Daniel E. Pilarczyk of Cincinnati celebrated an Easter Mass at the prison during which the men received the sacraments of initiation.

Since last fall, they have been part of the Rite of Christian Initiation of Adults, along with their sponsors, many of whom are also incarcerated at Lebanon, a state prison known as a “close-security” facility, which is one step down from maximum security.

The men wrote letters to Archbishop Pilarczyk petitioning him to celebrate an Easter Mass at the prison and confer the sacraments, and along with the volunteers and Lebanon staff they were thrilled to welcome him.

Joining the catechumens and their sponsors were volunteers from the prison’s Kairos program and many of their family members.

Christine Shimrock, a prison chaplain, praised Lebanon’s administration for the decision to allow the inmates’ relatives to be present for the Mass.

“This is unprecedented,” she told The Catholic Telegraph, newspaper of the Cincinnati Archdiocese. “Families aren’t allowed past the visitors’ area, so to see the place where the men worship is so meaningful.

“The prison administration and staff have been so supportive of our program. They realize that when the men are faith-filled, it trickles down to the entire prison,” she added.

“It’s really something special today for the men being baptized,” said Warden Timothy Brunsman, who attended the Easter liturgy. “We’re thrilled to have the archbishop here.”

Among other priests at the Mass were Jesuit Father Gene Carmichael, who celebrates Mass for inmates twice a month, and Father Terry Meehan, pastor at Our Lady of Sorrows, which has a team of Catholic volunteers committed to serving the spiritual needs of the prisoners. They meet weekly with about 30 Catholic inmates.

In his homily, Archbishop Pilarczyk spoke of the joy of the Easter season saying, “Easter is the celebration of new life and Jesus’ return to the living. In baptism, we begin to live a new life – the life of the risen Jesus.”

“Life’s a wonderful thing,” he added. “It’s a great gift. Today we thank God for life. May you find peace and contentment in the life of the Lord.”

Wearing crisp white shirts, the elect were then called forward to be baptized and confirmed. After the archbishop conferred the sacraments, the assembly welcomed the new members of the Catholic Church with resounding applause. The men later received the Eucharist for the first time.

Following the Mass, the archbishop laughed with the inmates while posing for pictures, and the men enjoyed refreshments with their guests.

One of the 10 inmates was Eric Edward Harmon, who attended a Catholic high school and said he decided to participate in RCIA because “it was time to put myself spiritually where I needed to be and that is being a member of the Catholic family.”

Being Catholic in prison is a challenge, Mr. Harmon acknowledged. “The pettiness goes to the extreme at times and it’s rough to keep on the right path with the corruption going on around you, so I pray a lot,” he said.

Fellow inmate Bernard Perfetto said what drew him to Catholicism was “the message of love, forgiveness and hope – three things that are in short supply in prison. It (becoming Catholic) really gives me the feeling that I’m a servant of God and that means a lot when you’re confined in a place like this.”

Mr. Perfetto said his faith also will give him the courage to re-enter society when the time comes. “It gives me hope to know that there is a faith community I can be part of on the outside, a place where I will be accepted,” he said.

Raised with no religion in his life, Benjamin Charles Walton said he felt a sense of belonging when attending Mass and found RCIA to be “educational and enlightening.”

“I know this is where I want to be,” he said of being received in the Catholic Church. “I’ve been so excited. This is the day I’ve joined Christ. I can’t stop smiling.”