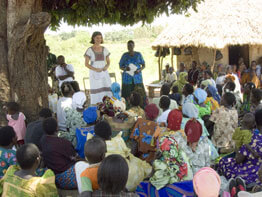 WASHINGTON – Jesuit-run Georgetown University has created a culture that helps students understand that serving others and being committed to something larger than themselves is important in life, according to one school official.

“Service is part of what it means to go to Georgetown. Part of our tradition is engagement with the larger community,” said Kathleen Maas Weigert, executive director of the university’s Center for Social Justice Research, Teaching and Service.

So the fact that each year many Georgetown undergraduate alumni – along with their counterparts from a number of other Catholic colleges and universities – volunteer for the Peace Corps should come as no surprise.

On Jan. 12 the Peace Corps released its annual list of top volunteer-producing U.S. colleges and universities in 2008.

The Peace Corps ranks schools according to the size of the undergraduate student body. Schools with under 5,000 undergraduates are small. Medium-size schools have between 5,001 and 15,000. Large institutions are those with more than 15,000.

“Many students come from family backgrounds where commitment to the larger good is an important aspect of life,” Ms. Weigert told Catholic News Service. “Students also take advantage of the range of challenges and opportunities in Washington, D.C. They intern on Capitol Hill working on policy or work in the inner-city schools helping to educate D.C. kids.”

“Who we are as an institution also plays a significant role,” she added.

Gonzaga uses a “team effort” to prepare students to enter into a service career after graduation, according to Todd Dunfield, assistant director of the school’s Center for Community Action and Service Learning.

“Our admissions office recruits from Jesuit high schools and looks for students who have had previous community service involvement. In interviews and writing samples, we look for people striving to be servant leaders,” said Mr. Dunfield.

Mr. Dunfield quoted a key Jesuit motto Gonzaga urges students to follow: “Be men and women for others.”

The University of Notre Dame in Indiana, run by the Congregation of Holy Cross, was the 13th-largest producer of Peace Corps volunteers among medium-size schools.

The University of Dayton in Ohio made the Peace Corps’ list for the first time, ranking 23rd among medium-size schools.

“This Peace Corps ranking is really one among many great examples of how the university’s mission of learn, lead and serve gets lived out among our students and our graduates,” said Nicholas Cardilino, director of the Marianist-run school’s Center for Social Concern.

“Many students choose BC because they have already made a personal commitment to service,” said Marie Geary, associate director at the Boston College Career Center.

President John F. Kennedy began the Peace Corps in 1961 as a challenge to young people to engage themselves in service to developing countries.

The mission of the Peace Corps is to promote peace and friendship among developing countries and the United States. The corps hopes volunteers can teach and learn from the people in the countries they serve.