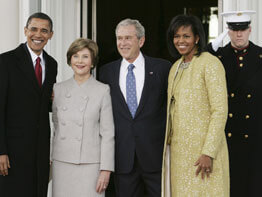 WASHINGTON – Up until just days before the inauguration, a group of about 70 students from a girls charter school in Atlanta had planned to watch the presidential inauguration events on television screens at Trinity Washington University.

Invited by Trinity’s president, Patricia McGuire, the students thought the campus of the Catholic university was as close as they could probably get to the activities as a large group.

But three days before the inauguration, the school’s co-founder and its Washington trip organizer, Nina Gilbert, was handed 76 tickets to see the inauguration in person. The tickets were presented to Gilbert on the Fox Cable News show, “Huckabee,” by the host and former presidential candidate, Mike Huckabee. He said the tickets had been donated by a member of Congress who wished to remain anonymous.

Needless to say, the group of middle-school students and their chaperones no longer planned to spend the day at the campus conference center.

The school group had been planning the Washington visit since the election. Gilbert, who booked a hotel in Virginia, was funding the trip in part through a $10,000 prize she recently received from the Maybelline cosmetic company. In December Gilbert won the company’s Beauty of Education Award.

But even without the group of middle-schoolers, Trinity’s campus was not going to be without activity. For four days the campus was hosting more than 400 members of the National Guard who were part of the security and crowd management personnel for inaugural events. The university also was hosting Jan. 19-21 more than 60 students from Spelman College in Atlanta who planned to attend the inauguration.

The Spelman students planned to join Trinity students in a campus inaugural gala, “A Celebration of Change,” on Trinity’s campus Jan. 20.

The Catholic University of America, down the street from Trinity, hosted an inaugural ball Jan. 16.

At least two Catholic parishes in the Washington area also were hosting inaugural balls – Our Lady of Perpetual Help in Washington and St. Margaret’s in Seat Pleasant.

Josephite Father William Norvel, pastor of Our Lady of Perpetual Help, noted in the Jan. 18 parish bulletin that 400 guests at the parish inaugural ball planned to celebrate the new president taking office.

“This will be the beginning of an incredible chapter in the annals of our American history,” he said. “All of us are now called to wrap President (Barack) Obama and his administration in prayer that the work the Lord has begun in him will be brought to perfection.”

The priest told Catholic News Service Jan. 16 that knee trouble prevented him from attending the inauguration in person but he planned to watch “every minute of it” on television.

Like other members of his parish, he had family members in town for the inauguration. He said there was “tremendous excitement” in the air.

“We’re overjoyed an African-American is taking a position of top leadership,” he said, noting that many parishioners wanted to attend the inauguration to “be part of the celebration” and they wanted their children there to “experience the joy.”