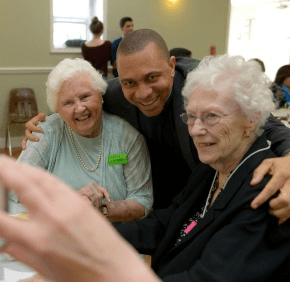 By Mary K. Tilghman
Special to the Review
GLEN BURNIE – In gratitude, the Catholic Church of Glen Burnie celebrated the contributions of its oldest parishioners with a special Mass and dinner April 17.
Some 70 parishioners of Holy Trinity, Church of the Crucifixion and Church of the Good Shepherd ages 80 and older attended.
After Mass at Holy Trinity, which included the sacrament of the anointing of the sick, all moved into the hall for a birthday celebration with gifts, brightly decorated cupcakes, entertainment and a lasagna dinner.

“I think this was a lovely thing to do for us. A lot of us have known each other for years and years,” said Evelyn Dunne who attended with her husband, Jim.
Parishioners of Holy Trinity and then Crucifixion for about 40 years, they were active in Sunday school and Scouting. She served as a parish nurse and her husband helped build Crucifixion.
For a particular group who once regularly attended 6:30 a.m. daily Mass, it was a chance to renew old acquaintances, said Pat McLellan.
“It’s a good reunion,” she said, noting some aren’t able to get out as much anymore.
Jacob Kaminsky agreed, saying, “It’s a great idea.”
Marge and Bruce Clickner, who have been parishioners their whole lives, were delighted to come.
‘Everything nowadays is so youth-oriented,” Marge Clickner said.
Jose Ortiz, who came with his daughter-in-law, Martha Ortiz, was perhaps the oldest honoree. He will mark his 100th birthday Dec. 8.

Heather Comstock, scout leader with Catholic Churches of Glen Burnie Pack 887, lights a birthday candle as part of the Senior Appreciation Celebration hosted at Holy Trinity Church. The April 17 event honored those who were 80 years of age and older. Among the gifts received by each attendee was a framed Apostolic Blessing from Pope Francis. (Kevin Parks | CR Staff)

Helen Alburn was a parishioner as a newlywed and has returned to the parish. She came to the celebration with her friend of 65 years, Gloria Wade.
George Lauer Jr. isn’t a parishioner but joined the festivities with his son, who is.. “It’s really nice they would do something like that,” said George Lauer III.
It took a lot of people to make the event a success, as Karen Bryant, the coordinator, said ”We met a lot to make sure the right hand knew what the left hand was doing.”
Cubs from Pack 887 and Scouts from Troop 887 carefully carried plates of lasagna and pitchers of ice tea to guests.
Parish volunteers bought birthday gifts, set tables and decorated the hall. Tamara Nicodemi baked dozens of cupcakes. Patti Sadler organized entertainment and arranged for a papal blessing. At the end of the party, each guest was presented with a framed copy.
“They are a beacon of light in this region of northern Anne Arundel County,” Sadler said.
“We felt it it was a way to honor the parishioners who passed the faith on to us,” said Howard Klohr, an Adult Formation member who prepared the dinner with Micky Yachera and Mike Brug.
Father Vin Arisukwu, who concelebrated the Mass with Father C. Lou Martin, the pastor, said the celebration is part of a Family Apostolate he initiated late last year. He sees it as “a bridge between the ecclesial family and individual biological families so the church will know the faithful.”
He said he began by visiting and blessing about 40 homes between October and December. “Everything we do stems from the family,” he said, noting Pope Francis’ frequent comments about the importance of family even before his April 8 exhortation on the subject.
Honoring senior members seemed a natural extension of the ministry. They are, Father Arisukwu said, “an inspiration to the younger ones.”