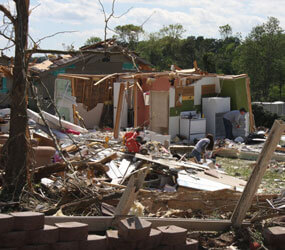 CLEVELAND, Tenn. – St. Therese of Lisieux Church is literally a shelter from the storm in the small city of Cleveland, where the 41,285 residents have the option of worshipping in more than 200 churches and the Church of God, the Church of God of Prophecy and five smaller denominations have their world headquarters.

Parish emergency-shelter coordinator Rob Parnell, 77, said that after Hurricane Katrina hit the Gulf Coast in 2005, the church offered its family-life center as a shelter.

“The agreement has been renewed every year, but it has never been used since Katrina,” Parnell said.

The family-life center was the drop-off point for donations, mass feedings and showers for people who had no electricity.

“We had a lot going on Wednesday,” Parnell said. “The gymnasium is more than an emergency shelter – it becomes someone’s home. But when the shelter is in operation, you want to have one entrance so you know who is coming and going. People were coming through the front door and were all over each other. You didn’t know who was who, and it was confusing.”

The donation drop-off point was relocated to Peerless Road Church of God of Prophecy, and people who needed showers were sent to the Family YMCA.

One of the tornadoes severely damaged the home of parish bookkeeper Marta Giraldo. She, her husband Jorge and their two children were not injured because they had accepted an offer from a friend to ride out the storms at SkyRidge Medical Center.

The foundations are all that’s left of several homes on the Giraldos’ street.

“Marta’s home is still standing, but the roof was lifted,” said Andy Forsythe, director of religious education at St. Therese. “The storm blew insulation inside the house, and there was water damage.” Much of the Giraldos’ furniture and clothes will have to be thrown away.

“We got hit hard,” said Michele Hammonds, Red Cross program manager, as she waited to register clients. “We’ll just have to pull together like I know this community has in the past.”

“It hit, then a few hours later a second one hit, and (the tornadoes) just kept hitting,” Davis said. “We declared the disaster at 10 p.m., and that was mainly because at that point we were stretched to the max because it just kept coming.”

The storms hit in the northwest, then the west, next in the south, southeast and finally in the eastern portions of the area.

“Our emergency workers were just going everywhere. It was something,” Davis said. “From my perspective, it was the worst disaster of this magnitude, at least in my lifetime, but probably in our history.”

Parnell said he always tells people he got lucky when he answered a notice in the church bulletin.

“The bulletin had a little piece in it announcing that church was offering the gymnasium as a shelter and anyone interested in helping should call this number. I didn’t know what it was, so I called the number and it was the Red Cross,” he said. “You always think of the Red Cross when there is a hurricane or an earthquake, but it never happens to you.”

He learned that the local Red Cross responds to nearly 150 house fires each year. It is neighbor helping neighbor, which is the Christian thing to do.

“This is one of the most rewarding things I’ve done, and St. Therese is one heck of a good parish for doing it,” he said. “This is the church’s confirmation weekend. They were going to have their confirmation banquet in the gym, but they moved to a smaller hall. It’s quite a thing to be willing to do something for their neighbor, Catholic or not.”