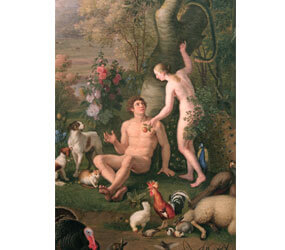 This is a detail of a painting of Adam and Eve by Peter Wenzel that is displayed in the Pinacoteca at the Vatican Museums. A national debate among evangelicals on the reality of Adam and Eve has prompted a look at what the Catholic Church says about the “first couple.” (CNS photo/Nancy Wiechec)|

ALBANY, N.Y. – Adam and Eve recently made an appearance on National Public Radio – not as guests, but as the topic of a discussion about their existence.

“Morning Edition,” a regular NPR series, examined the current debate among evangelical Christians over whether the first couple actually lived or are characters in a Bible story that makes a point about God and his creatures.

In simplified form, the fundamentalist view is that Adam was a real person and the first human created by God, while science argues that human beings evolved as a group. Some Christians hold that they must follow scientific findings and adapt their faith’s teachings to that information.

Similar debates between science and religion have gone on for a long time, and the Catholic Church has worked through those disputes for centuries, according to Franciscan Father Michael D. Guinan, professor of Old Testament, Semitic languages and biblical spirituality at the Franciscan School of Theology in Berkeley, Calif.

“Since the 1600s,” he said, “the traditional views of Genesis have suffered three challenges: Galileo on the movement of the earth around the sun and not vice versa; the growth of geology in the 18-19th centuries and discoveries about the age of the earth”; and Darwin’s theory of evolution.

“The church has negotiated these challenges, but not without struggles. Today, no reasonable person in or out of the church doubts any of these three,” Father Guinan said in an interview with Catholic News Service.

The controversy – the one over Adam and Eve – involves the competing theories of polygenism and monogenism, that is, the question of whether humans descended from many progenitors, as science argues, or from one couple, as Genesis seems to posit.

“In the past, the church’s statements regarding original sin have presumed that Adam and Eve were historical people,” the priest explained. “The question of monogenism and polygenism never occurred to” those writing the documents.

He said that the most recent statement to mention this debate is Pius XII’s “Humani Generis,” a 1950 encyclical. It states: “The faithful cannot embrace that opinion which maintains that … Adam represents a certain number of first parents. Now it is in no way apparent how such an opinion can be reconciled with that which … the documents of the teaching authority of the church propose with regard to original sin, which proceeds from a sin actually committed by an individual Adam.”

In the six decades since that document, Father Guinan continued, “the Catholic Church has accepted the use of historical-critical tools to understand the Scriptures, which are, among other things, historical documents.

“The 1993 instruction of the Pontifical Biblical Commission on ‘The Interpretation of the Bible in the Church’ calls the historical-critical method ‘essential’ and rejects explicitly a fundamentalist reading of Scripture.”

When such an approach is applied to the Bible, he said, “Catholic scholars, along with mainstream Protestant scholars, see in the primal stories of Genesis not literal history but symbolic, metaphoric stories which express basic truths about the human condition and humans. The unity of the human race (and all of creation for that matter) derives theologically from the fact that all things and people are created in Christ and for Christ. Christology is at the center, not biology.”

He added that “the question of biological origins is a scientific one; and, if science shows that there is no evidence of monogenism and there is lots of evidence for polygenism, then a Catholic need have no problem accepting that.”

When such an approach is followed, he said, Adam and Eve are not seen as historical people, but as important figures in stories that contain key lessons about the relationships of humans and their Creator.

The Catechism of the Catholic Church states that “the account of the fall in Genesis … uses figurative language, but affirms a primeval event, a deed that took place at the beginning of the history of man. Revelation gives us the certainty of faith that the whole of human history is marked by the original fault freely committed by our first parents.”

In that language, Father Guinan detects a straddling of the issue. “It recognizes that Genesis is figurative language,” he pointed out, “but it also wants to hold to historicity. Unfortunately, you can’t really have both. The catechism is clearly not the place to argue theological discussions, so whoever wrote it decided, as it were, to have it both ways.”

The answer, he said, “is a definite ‘yes.’ We find them when we look in the mirror. We are Adam, and we are Eve. … The man and woman of Genesis … are intended to represent an Everyman and Everywoman. They are paradigms, figurative equivalents, of human conduct in the face of temptation, not lessons in biology or history. The Bible is teaching religion, not science or literalistic history.”