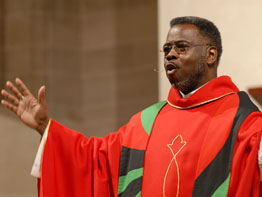 DETROIT – At an annual Mass celebrating the legacy of the Rev. Martin Luther King Jr., Catholic Charities USA unveiled a plan to spark a national conversation about racism and poverty.

“Poverty and racial injustice betray our national ideals of liberty and justice for all,” said Father Larry Snyder, president of Catholic Charities, during a Jan. 21 press conference in the offices of the Cathedral of the Most Blessed Sacrament in Detroit.

Catholic Charities USA, which is based in Alexandria, Va., and has 1,700 local agencies and institutions nationwide, released a paper titled “Poverty and Racism: Overlapping Threats to the Common Good.” It was handed out to those attending the Martin Luther King Jr. Day Mass.

Father Snyder said Catholic Charities would use the paper to start a national dialogue on the topics that most Americans don’t want to address.

“This document … is intended to start, enrich and inform a conversation throughout our country, compelling each of us to serve, educate and advocate for programs and policies that will foster unity in all of our communities, eliminate racism and significantly reduce poverty in our lifetime,” he said.

The document is part of Catholic Charities’ Campaign to Reduce Poverty in America, which was started in January 2007 with the goal of reducing poverty by 50 percent by the year 2020.

The 22-page paper begins by recalling the dream of Rev. King, and also the encouragement given to Catholics by the late Pope John Paul II to end racial injustice and inequality. The paper goes on to define racism as a threat to both Christianity and society and to detail its relationship to poverty.

The document cites various historical examples of how the U.S. government and even the Catholic Church have contributed to racism and racially biased economic inequality. It gives a snapshot of the current reality of racism – decrying wealth disparity and reflecting on current public debates such as those over immigration reform and Hurricane Katrina.

Father Snyder said during the press conference that Catholic Charities is uniquely positioned to begin a national dialogue on racism and poverty, given its work with the poor.

“Catholic Charities knows firsthand how racism and poverty are interconnected,” he said at the press conference. “Every day, our charity sees the face of the poor throughout America.”

He spoke too of the continued existence of white privilege as “very unintentional, yet there.”

He said Catholic Charities would start the national dialogue by coordinating with community leaders throughout the country, and by bringing the paper to legislators in Washington and advocating for legislative changes.

The paper was released in Detroit in recognition of the local church’s commitment to racial dialogue, and because the Archdiocese of Detroit has a 26-year tradition of honoring the work of Rev. King with a liturgy.

During the Mass, Father Williams encouraged hundreds gathered at the cathedral to consider their own role in addressing the problems of society. He said that everyone, like Noah from the first Scripture reading and Rev. King, has an assignment from God to be part of a diverse and accepting community.

Catholic Charities’ role, said Father Williams during the press conference, will be to put racism and poverty at the forefront of national attention.

“Catholic Charities is saying, ‘We’re going to be the pre-eminent organization to break the silence and start the conversation,’” he added.