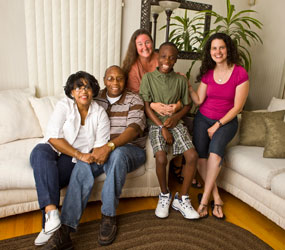 Emil Murvil remembers only sleeping in his bedroom Jan. 12.

As he rested, his house crumbled around him. A 7.0-magnitude earthquake brought the Haiti capital of Port-au-Prince to its knees and left the 13-year-old boy with limitless energy writhing in pain. Hundreds of thousands of Haitians, including an aunt, died as a result of the earthquake.

In the months that followed, Emil became a passionate cause for an emergency children’s health care provider, Baltimore’s Catholic Charities, a Religious Sister of Mercy and a Parkville couple.

He has spent the last four months in Baltimore, staying with foster parents Dennis and Beverly Bullock, undergoing countless surgeries on a badly fractured pelvis and grueling rehabilitation sessions.

The critical players in his recovery gathered in June at Mt. Washington Pediatric Hospital. It was a joyous occasion, as some met Emil for the first time.

“We had so many people helping us along the way, said Helen Salan, executive director of Michigan-based Healing the Children, “it was incredible.”

When doctors in Haiti finally saw Murvil and his X-rays a month after the earthquake, his life was in danger. His pelvis badly fractured, he could not stand on his own.

“It (his pelvis) was crushed, rotated and shifted,” Sister Karen said. “Basically, we looked at the X-ray and said, ‘How is this child still alive?’ When you have a pelvic injury like that, with the major vessels that run through the pelvis, usually you bleed out. When I met him and he had sensation in his legs, I wondered ‘How does he have feeling in them?’ ”

An operation risked death, but Sister Karen knew a fellow Hopkins doctor who was daring enough to perform surgery on Murvil in Baltimore and wanted to see him immediately.

Healing the Children offered to cover his flight to the U.S., but getting him on American soil meant Salan negotiating with Homeland Security and Health and Human Services officials. It was agreed that once Murvil was fully recovered, he would return to Haiti.

“It took lots of work,” Salan said. “It was kind of serendipitous.”

Sister Karen contemplated the logistics of taking care of Murvil herself in Baltimore. Salan called Catholic Charities’ communications director, Kerrie Burch-DeLuca, to see if the agency could help.

Hearing the story, Burch-DeLuca had her hands on her face. Catholic Charities executive director Bill McCarthy queried about her problem.

Catholic Charities staff members such as Laurie Vozella-Bell, Jim Ruesch and social worker Kelly Grande came together to make it a reality. They needed to find the perfect family.

The Bullocks watched the news coverage of Haiti from their home and longed to help.

“When I saw the earthquake, I cried,” Beverly Bullock, 50, said. “I said, ‘Lord, I’ve got three rooms and four beds where I can make a difference. Lord, just use me.’ The next thing you know, we get a phone call.”

The Bullocks do not have biological children, but have been foster parents for 13 years and maintain daily contact with their first child, now 27. They currently have a 12-year-old boy living with them. They adopted Cameron, 3, through Catholic Charities, and want to adopt again.

“The payoff is just seeing the results,” Dennis, 46, said of being foster parents.

“I love all the children God brings into our lives.” Beverly said.

When asked by Catholic Charities, they offered to take in Emil. Salan still serves as his legal guardian.

“We couldn’t have done it without the Bullocks,” Grande said.

Grande and the Bullocks met Murvil when he arrived, confused, lonely and angry, in the U.S. March 24. The Bullocks took him home that night and to Johns Hopkins the next day. Within a week, he had undergone two surgeries and was transferred to Mt. Washington Pediatric Hospital for rehabilitation.

The Bullocks had the task of caring for a boy who some thought would never walk again.

As they bonded, Emil became obsessed with cell phones. He enjoys Popeye’s chicken and Maryland crabs with the family. Despite his Creole, Emil learned to say “please” and “thank you.” He calls his parents in Haiti regularly.

Although they have said goodbye to children over the years, it doesn’t make Emil’s imminent departure any easier. The Bullocks know conditions in Haiti are unpredictable and they worry about his well-being. He walks with a stilted gait, despite his miraculous recovery.

When asked if he wants to leave, Emil emphatically offered “No, no, no!”

“It’s hard because I know he wants to stay,” Dennis said tearfully.

Grande is amazed at Emil’s physical and emotional growth. The experience has been life-affirming for all involved.

“He’s just kind of got this buoyant spirit,” Grande said.