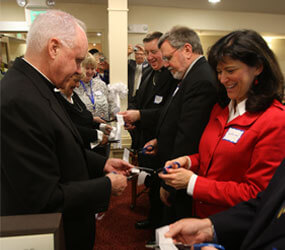 Betty Wilson was on a waiting list for more than four years to get into a Catholic Charities’ low-income housing unit. The 79-year-old widow finally secured a spot this summer at Friendship Village, a newly opened, 63-unit, low-income senior apartment complex operated by Catholic Charities.

“This is better housing than I could ever afford,” said Wilson, a mother of 10 and grandmother of 19 who relies on Social Security.

“It’s quite a help to me,” she said. “The people here are nice and friendly. I like the way they treat everyone. I get along with them real good.”

As more Baby Boomers reach retirement age, people live longer and the country suffers from an economic downturn, Wilson’s story is becoming all-too-familiar. Approximately 1,400 people are on a waiting list to get into one of Catholic Charities’ 1,506 units spread out in 20 locations in Baltimore City and the counties of Anne Arundel, Baltimore, Garrett and Harford.

“Our new building was fully leased and occupied in four weeks,” said William McCarthy, executive director of Catholic Charities. “That’s an indication of the demand that’s out there.

“Many seniors simply do not have sufficient income to live in a nice and safe environment. That’s just a reality.”

Catholic Charities, which has managed senior housing for more than 25 years, is now constructing 105 units on the campus of Our Lady of Fatima in Baltimore to help meet the demand. The charity also has a contract on property in Fullerton, where it hopes to erect 180 more units next year.

“Our goal is to allow seniors to live in a healthy and safe environment for as long as possible,” said McCarthy, noting that approximately 20 percent of the charity’s 1,550 senior housing residents are age 85 or older.

Senior apartments are about 540 square feet and include a kitchen, living room, bedroom and bathroom.

Catholic Charities prides itself on promoting a strong sense of community among the residents, McCarthy said. All the buildings have service coordinators who bring resources into the community. Catholic Charities also offers a congregate housing program subsidized by the state that offers cleaning, laundry and food services at reduced rates for frail elderly.

Dale McArdle, Catholic Charities’ director of housing services, said the average age of residents is 77. The male-to-female ratio is about 20-80. To be eligible for housing, residents must be 62 and meet maximum income guidelines. Seventeen of the program’s properties are federally financed, with residents having a maximum income of $28,750 a person or $32,850 for two. For the federally-funded properties, residents pay 30 percent of their income for rent.