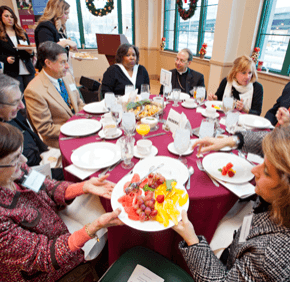 By Elizabeth Lowe
elowe@CatholicReview.org
Twitter: @ReviewLowe
Choking back tears, Sonya Gibbs explained to a room full of supporters of Catholic Charities how she is regaining control of her life after losing her job and home, burning through her savings and living in her car, motel and shelter.
“I was in a shelter when I learned of Hosanna House,” Gibbs said of a Catholic Charities’ program in eastern Baltimore County program, home for 15 formerly homeless women. “I was accepted into permanent housing at Hosanna House and moved into the building in late August. I want to thank Catholic Charities … and each of you for giving me a fresh place that I can call home where I feel safe and I have an opportunity to gather my thoughts and rebuild my life.”
Gibbs shared her story at Catholic Charities of Baltimore’s 33rd annual leadership breakfast Dec. 4 at Our Daily Bread Employment Center (ODBEC) in Baltimore.
Archbishop William E. Lori, Catholic Charities board chairman, told supporters that Gibbs’ story shows “the human reality and the divine reality of Catholic Charities.”
“One of the things that Pope Francis tells us,” he said, “is that when we think about faith and when we think about our lives, the way in is usually not through our head, it’s through our heart. Once our hearts have been touched, then our heads kick into gear and we know what we must do and what we must do is the work of Catholic Charities and its programs.”
To view a slideshow, navigate the arrows below.
See a photo you’re interested in purchasing? Click here.
That work, Archbishop Lori said, is a community effort which “touches, as we have seen today, so many, many lives in very, very profound ways.”
The Archdiocese of Baltimore is not the biggest in the U.S., but its division of Catholic Charities is among the largest, the archbishop said.
“That speaks volumes about the generosity of this community and the goodness of this community effort,” he said.
Brian Rogers, chairman of this year’s breakfast, announced the Leadership Breakfast Campaign has raised $3.2 million for operating expenses this year and expects to meet its goal of $3.5 million by the campaign’s end.
William McCarthy Jr., executive director of Catholic Charities, underscored the nonprofit’s achievements in 2013, which includes assuming operation of the Weinberg Housing and Resource Center across the Fallsway from ODBEC, and 96 residents moving into the first building of the organization’s new supportive senior housing community in Baltimore County in Fullerton.
In addition, McCarthy said, the meal programs at Our Daily Bread, My Sisters Place and Sarah’s House served more than 377,000 meals last year, compared to 247,000 meals served four years ago. In Our Daily Bread’s 33 year history, more than seven million meals have been served over more than 12,000 consecutive days.
“In addition to being in the business of helping people improve their lives in material ways,” McCarthy said, “we are in the business of helping our brothers and sisters find hope and recognize that they are worthy of love and that they can then share this love with others. This life-changing work would not be possible without your generosity and the generosity of thousands like you.”
By the numbers (FY 2013):
Meals served: 377,000
Volunteer hours served: 251,015
Volunteers: 19,910
Placed in transitional and permanent housing: 1,200
Workers placed: 492
To donate to the Leadership Breakfast Campaign, call 410-625-8489, email ghaines@cc-md.org or visit cc-md.org.
Also see:
Sugar plums – and fried dough: Summer tradition on Christmas menu in Bradshaw
PrevNext