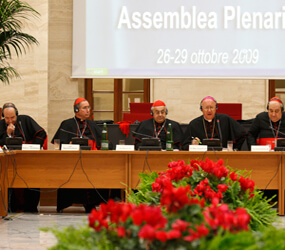 As president of the Pontifical Council for Social Communications, Archbishop Celli presided over a four-day meeting of cardinals, bishops and Catholic media professionals to discuss – mainly in small groups – new pastoral guidelines for church communications.

A recurring theme during the meeting Oct. 26-29 was what constitutes Catholic communications and what, if anything, can be done about those who use the word Catholic to describe themselves while using all sorts of nasty adjectives to describe anyone who doesn’t agree with them.

Archbishop Celli said he didn’t think a Catholic bloggers’ “code of conduct” would accomplish much, especially when what is really needed is a reflection on what it means to communicate.

Upright, ethical communication is a natural result of a sincere desire to share the truth about God, about faith and about the dignity of the human person, he said.

The archbishop said that what Pope Benedict XVI has said about solidarity and development aid goes for communications as well: “Charity needs truth and truth needs charity.”

“Anyone speaking publicly as a Catholic has to have those ethical values that are part of a serious, honest form of communication,” Archbishop Celli said.

Carl A. Anderson, supreme knight of the Knights of Columbus and a consultant to Archbishop Celli’s council, said, “If Catholics cannot deal with each other with civility, how can we expect others to?”

“We make certain claims about what kind of community we are; we have set the standards high and we must try really, really hard to live up to that,” Anderson said.

He said Pope Benedict is an example of a good Catholic communicator: “He seeks clarity and definition while demonstrating charity and respect for others.”

Talking about the Catholic blogosphere, Los Angeles Cardinal Roger M. Mahony said, “I have been appalled by some of the things I’ve seen; of course, I’ve been the object of some of them.”

Being Christian, he said, means treating others like Jesus treated people: reaching out to all and exercising extreme caution when making judgments.

“One of the side effects of the new technology that frightens me a bit is that people can hide behind a fake facade and then start shooting cannons at other people,” the cardinal said.

One of the pontifical council’s consultants, Basilian Father Thomas Rosica, the head of Canada’s Salt and Light Catholic Media Foundation, said the Internet and blogs have brought about a “radicalization of rhetoric,” even among Catholics.

The Web site of Salt and Light Television, he said, sometimes receives hundreds of comments on a story.

Asked to address the council about Catholic media in North America, Father Rosica said, “On the Internet there is no accountability, no code of ethics and no responsibility for one’s words and actions.”

So many Web sites and bloggers who call themselves Catholics focus so much on negative stories and messages that increasingly “Christians are known as the people who are against everything,” he said.

Cardinal Mahony said the sharp and often uncharitable divisions among Catholics seen on the Internet was particularly pronounced during the 2008 U.S. presidential election campaign.

And, he said, the campaign was not exactly a high point for unity among the U.S. bishops either.

During the campaign, Cardinal Mahony said, “I sensed a dangerous shift away from unity in faith and faith practice to differing opinions on this party or the other party, which I think is a very, very dangerous path to go down.”

Some people could get “the impression that some bishops are very much in favor of one political party over the other, which should not be,” he said. He added that when it comes to applying the Gospel to social questions bishops should be models for the Catholic faithful on how to hold a civil discussion, online or offline.

“You don’t have dialogue when people anonymously throw out their hatreds, their prejudices, their biases and always – in every case – end up attacking people,” the cardinal said.