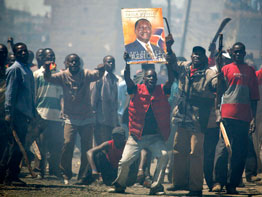 NAIROBI, Kenya – Following days of violence and death after the announcement of disputed election results, Kenya’s Catholic bishops appealed to political leaders to make every effort to engage in dialogue to resolve the crisis.

A church official also said a bishop in one of the areas with the worst violence had appealed for help for the local humanitarian crisis.

“We appeal specifically to the political leaders … to reach out to one another through dialogue in order to seek a solution to the present situation,” said a Jan. 2 statement signed by 24 Kenyan bishops, including Nairobi Cardinal John Njue, chairman of the Kenya Episcopal Conference.

The four-page statement, “My Peace I Give You,” emphasized that Kenya needs peace based on justice and true brotherhood. The bishops offered to mediate the crisis and proposed a review of the election results.

“We make an appeal to all responsible to seek ways like establishing a commission to audit and specifically review the tallying of the parliamentary and presidential polls,” said the bishops, noting allegations of electoral irregularities.

“We urge that everything possible should be done in order to investigate and establish the truth of these claims by means other than violence and destruction of property,” they said.

The Kenya Human Rights Commission and the International Federation for Human Rights said more than 300 people had died since the Dec. 27 presidential election in which President Mwai Kibaki was declared the winner. Among those dead were up to 50 people burned alive in an Assemblies of God church where they had sought refuge in the city of Eldoret.

Property damage throughout Kenya has been estimated in the millions.

Raila Odinga, the opposition candidate, claims the election was rigged. The head of the country’s electoral commission said both sides pressured him to announce the results quickly, and he is not sure he announced the correct results.

The bishops urged Kenyans – especially youths – to exercise restraint in their behavior and remarks and to refuse to take part “in any form of destruction, looting or even receiving stolen goods.”

“Do not think you are powerless,” they said. “You can do something. Talk to relatives, friends, neighbors, people you know who can help resolve the current situations.”

“Half of this figure is being sheltered within the Eldoret Catholic diocese,” he said.

A Ugandan official told The Associated Press that more than 5,000 people had fled to Uganda, and AP reported several hundred had fled to Tanzania.

Father Wambugu told Catholic News Service that churches in the Eldoret Diocese had established an interreligious coordinating committee, while the local Catholic Church has told the Kenyan branch of the charitable agency Caritas Internationalis and the U.S. bishops’ Catholic Relief Services to coordinate the humanitarian crisis.

The priest said Eldoret Bishop Cornelius Arap Korir had appealed to his fellow Catholic bishops to come to the aid of the diocese “at this hour of need.” Father Wambugu said the bishop asked for food, bedding, tents and anything else necessary for sheltering the rapidly increasing number of needy people.