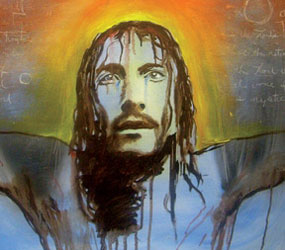 In the same week Matthew D’Adamo was laid off after nearly a decade as a graphic designer with The Baltimore Sun, he and his girlfriend of three years broke up. It was a devastating one-two punch that left the lifelong artist reeling more than a year ago.

D’Adamo quite literally threw himself into painting as a way of dealing with the sadness, frustration and isolation that seemed to be overwhelming his life.

Abandoning his brush, the parishioner of Church of the Annunciation in Rosedale used his bare hands to smear brightly colored oil paints across a canvass. It was an approach unlike anything he had ever previously attempted.

“I wanted it to be raw and visceral,” remembered D’Adamo, 30. “I felt like I was on the cross and that my life was going through a kind of passion.”

The image that emerged from D’Adamo’s creative touch showed a torrent of blood flowing from the side of Christ at the crucifixion. It was a deeply symbolic artwork that became a prayer. D’Adamo had placed his pain inside Christ’s body on the cross.

D’Adamo hopes to share his Catholic faith and help others find a closer connection with their faith through art. His work, which includes gripping images of God, Moses and moments from the life of Christ, was featured in an art exhibit last fall at St. Ignatius in Baltimore. He is looking for other parishes that would be willing to display his work.

For a long time, the bearded artist was hampered by being a perfectionist. Some of his earlier works were composed of hundreds of dot points to craft a portrait. Catholic counselors convinced him to let go of the quest for perfection, which changed his outlook on art.

“They told me about an Indian tribe that used to make elaborate rugs in which they would purposely sew a mistake,” D’Adamo remembered. “They recognized that only God is perfect.”

One of D’Adamo’s favorite and most compelling works is called “Surrender.” It started out as a depiction of God over the water, but when the artist made a mistake it led to a reimaging of the artwork into a painting of Christ with outstretched arms on the cross. The image was inspired from the 1977 film “Jesus of Nazareth.” D’Adamo used nails to scratch Scripture passages into a brilliant fire color in the background.

“We make tons of mistakes in life, but God turns them into something beautiful,” said D’Adamo, who teaches seniors to paint at Parkville’s Oak Crest Village once a week.

D’Adamo prays before painting and believes his art has lifted him out of a low-point in his life. God is always present, he said.

“No matter how much our life seems to be falling apart,” he said, “God’s in charge.”