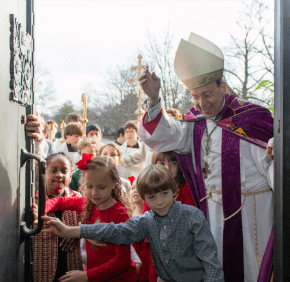 The occasion was the Holy Door rite inaugurating the extraordinary Holy Year of Mercy in the Archdiocese of Baltimore. Standing outside the Cathedral of Mary Our Queen in Homeland before 9:30 a.m. Mass, the archbishop blessed its main central doors, then stepped aside and waved inside some its youngest members before filing in behind them.

Why the emphasis on the boys and girls gathered for the cathedral parish’s increasingly popular Children’s Liturgy of the Word?

Jubilee years are held every 50 or 25 years. Coming just 15 years after the Jubilee marking the third Christian millennium, this Year of Mercy is an opportunity for grace and pardon.

Participants in the Children’s Liturgy of the Word at Cathedral of Mary Our Queen in Homeland respond to teacher Brigid Wilder Dec. 13. (Olivia Obineme/Special to the Review)

Five days after Pope Francis, on the Feast of the Immaculate Conception, officially opened it at St. Peter’s Basilica in Vatican City, the cathedral was the first of eight sites in the archdiocese opened as pilgrimage sites for those who might not have an upcoming trip to Rome.

At the cathedral, more than 100 children headed downstairs to learn about the Third Sunday of Advent and its readings from Brigid Wilder, a fifth-grade teacher at the School of the Cathedral, who runs CLOW along with parish nurse Catherine Lobo.

Upstairs, the archbishop’s homily pointed to the prospect of joy found in the Year of Mercy’s call for reconciliation and corporal and spiritual works of mercy. Twelve days before Christmas, he framed that within the good will found in the church every Advent season.

“This year, the church invites you and me to rejoice more intensely,” Archbishop Lori said. “My hope is simply to call attention to the joy God’s mercy brings to us.

“This is an exceptional opportunity to experience the forgiveness of sin, and deepen our unity with Christ and the church. (Pope Francis) is calling us to be merciful, in the same way God’s mercy is extended to us. By solemnly opening the holy door and walking through it, God has opened the doors of his heart to you and me.”

Rather than being a “dour” experience, the archbishop explained that the Year of Mercy should “make us happy,” likening the example of old friends on the outs reconciling through the simple action of one speaking “words of kindness” to God’s forgiveness of our sins.

“Jesus opened the door, made God’s mercy the very foundation of the life of the church,” Archbishop Lori added. “Mercy is ours. God’s love can change us, transform us.”

In the day’s Gospel, Luke 3:10-18, the archbishop noted that “John the Baptist tells us to share what we have with the poor. … God’s mercy is available in our daily lives, no matter our calling, or profession.”

Monsignor Richard W. Woy, rector of the cathedral, concelebrated the Mass, and Deacon Charles Hiebler proclaimed the Gospel. After Mass, the archbishop greeted a steady stream of worshippers.

He was to conclude the archdiocesan Year of Mercy pilgrimage site openings with another nod to youth at the Basilica of the National Assumption of the Blessed Virgin Mary in Baltimore, where the 4:30 p.m. young adult Mass was to include those who have committed to attending World Youth Day in Poland next July.

Pope: The church needs this Holy Year of Mercy