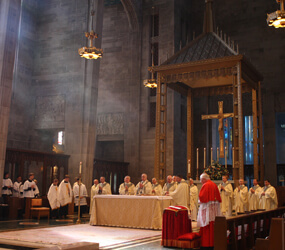 Fifty years to the day that Archbishop Francis P. Keough dedicated the Cathedral of Mary Our Queen, friends and parishioners of the Homeland landmark gathered Nov. 15 to celebrate its golden jubilee.

“Do not the majestic spires of this house of God serve as reminders to the thousands who pass by daily on this busy thoroughfare,” Archbishop Edwin F. O’Brien asked in his homily, “reminders of the Church’s role in this and in every community, in proclaiming in a myriad of concrete ways, God’s love for every human being?”

Archbishop O’Brien said the spires should remind all of the Catholic beginnings of Maryland, “especially in a time when some would mute the Catholic voice addressing major moral issues of the day: the sacredness of marriage between a man and woman, conscience rights of health care providers, the obligation of all toward the alien and stranger, the basic and prior right of parents to educate their children with assistance from their own taxes, the right of the poor to proper housing, health care, safe streets and quality education.”

The “vibrant presence” of the cathedral and her daughter churches throughout the archdiocese serve as a daily reminder, Archbishop O’Brien said, “that secularism is not the religion of an America whose motto is ‘In God we Trust,’ and whose founders proclaimed the self-evident truth that ‘all men are created equal and endowed with inalienable rights grounded in the laws of nature and of nature’s God.’”

The limestone cathedral was made possible through the generosity of Thomas J. O’Neill, an Irish merchant and owner of a popular dry goods store in downtown Baltimore.

During the Great Baltimore Fire of 1904, O’Neill is said to have raced to a Carmelite convent to beg the nuns to pray that his business would be spared the quick-moving flames. He pledged to God that he would build a great cathedral if his business survived. It did, and O’Neill left a bequest to erect the cathedral.

During the anniversary liturgy, which attracted hundreds of worshippers, Archbishop O’Brien used a refurbished chalice that belonged to Monsignor Thomas A. Whelan – the cathedral’s first rector who died in 1987.

The archbishop paid tribute to the cathedral parishioners and the rectors who have led the cathedral. He thanked Monsignor Robert A. Armstrong, current rector, for his quarter century of service there.

Monsignor Armstrong told those gathered that the cathedral is a sign of unity with the other churches of the archdiocese.

“It’s the heart of the archdiocese, the mother church – the physical reminder of our chief shepherd, Archbishop O’Brien,” Monsignor Armstrong said. “It’s a place of splendid ceremony, of prayer, of teaching and of service.”

Monsignor Armstrong hosted an outdoor reception following the Mass, cutting a giant cake that was fashioned in the shape of the cathedral.

“It’s so special that we can celebrate all of the tremendous growth this parish has had in the last 50 years,” said Betsy McGeady, a parishioner for 40 years. “We are certainly indebted to all of the clergy who have been here and carried on so well over the years.”