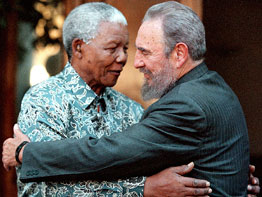 WASHINGTON – During nearly 50 years of rule, Fidel Castro had an often-stormy relationship with the Cuban Catholic Church.

The Jesuit-educated Castro was equally comfortable defusing the Cuban church as an institutional force during the early years of his revolution in the 1960s as he was bantering casually with Pope John Paul II during the papal visit to Cuba in 1998.

The 81-year-old Cuban leader announced Feb. 19 that he was retiring as head of the island nation. He had temporarily ceded power to his younger brother, Raul Castro, in July 2006, after undergoing surgery because of intestinal bleeding – but he never returned to office, ending more than 49 years of continuous rule.

He came to power on the Caribbean island Jan. 1, 1959, at 32 years of age after leading a successful guerrilla rebellion against unpopular dictator Fulgencio Batista.

After Batista came to power in 1952, Castro, a young lawyer, started organizing a rebel force.

Initially, his successful rebellion had ample support among Catholics. He cultivated the support by saying his revolution was motivated by Christian principles. In a press interview with a Catholic priest shortly after taking power, Castro noted that six priests were chaplains to his rebel forces.

But things quickly changed. In 1961, he declared himself a Marxist-Leninist and made Cuba the first communist state in the Western Hemisphere, moving it into the Cold War camp of the Soviet Union.

His government began institutionally dismantling the church, nationalizing 350 Catholic schools and expelling 136 priests. Church activity was restricted to religious services on church property. Social action projects were prohibited. Church programs were monitored, and Cubans were discouraged from attending worship services with churchgoers discriminated against when seeking state and university employment.

Castro’s view of the church further soured in the mid-1960s during Operation Pedro Pan, in which U.S. church officials helped resettle 14,000 unaccompanied Cuban children sent to the U.S. by parents wanting them to escape Castro’s rule.

Despite the crackdown on the church, Castro never broke diplomatic relations with the Vatican and continued for decades to get from Vatican, Cuban and U.S. church officials statements criticizing the crippling U.S. economic boycott of Cuba, which he constantly cited as the reason for Cuba’s economic woes.

Because of this church support there also were some positive notes in church-state relations.

During a 2006 U.S. visit, Cuban Cardinal Jaime Ortega Alamino of Havana said that starting in the 1980s “there was an evolution on the part of the government,” increasing church-state communication, and “the tension began to diminish.”

The result was that limits on the church no longer involved the ability to worship but involved the continued inability to have Catholic schools or teach religion in public schools, said the cardinal.

But Castro also knew how to play foreign church factions against the Cuban hierarchy to make it look as if only local Catholics opposed his rule.

In the 1970s Castro tapped into Latin American theologians’ interest in Marxism and their political interest in socialism as an alternative to the capitalism practiced in the region. He cultivated support among non-Cuban Catholic intellectuals and priests dissatisfied with the region’s growing gap between the rich and the poor, inviting them to visit his island as a counterpoint to criticisms by Cuban and Vatican church officials.

In 2003 he sidestepped the Cuban bishops and directly negotiated with the Vatican to allow a group of Brigittine Sisters entry into Havana at a time when the Cuban bishops had a long list of foreign priests and nuns wanting entry visas.

In the early 1990s, serious talks began about the possibilities of a papal visit to Cuba in the wake of the collapse of the Soviet bloc.

After a 1996 Castro visit with Pope John Paul at the Vatican, plans finally developed for the Jan. 21-25, 1998, papal trip, interpreted as a sign of improved church-state relations based on a willingness by the government to give the church more breathing space in the post-Cold War era.

Castro met the pope several times during the Cuban visit, allowed church officials to mobilize Catholics to attend papal events and permitted papal activities to be televised and reported in the state-controlled media.