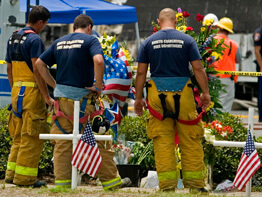 CHARLESTON, S.C. – As chaplain of the South Carolina Firefighters’ Association for the past 23 years, Monsignor Joseph R. Roth has made a habit of writing to the families of each of the 80 or 90 members who die each year.

But he never expected to have to write to nine families at once, as he will now do after a fire in a Charleston furniture warehouse claimed the lives of nine firefighters in the early morning hours of June 19. The fire began around 7 p.m. June 18.

“We offer the condolences of the Diocese of Charleston to the nine families of the Charleston Fire Department who died in the terrible fire this morning,” he said. “We also certainly express condolences to the members of the fire department who are greatly distressed by what has happened. We hope and pray that they will be able to receive God’s choicest blessing of peace in this tragic situation.”
Bishop Robert J. Baker of Charleston was in New Mexico June 19 for the spring retreat of the U.S. Conference of Catholic Bishops.

Monsignor Roth said he was heading to a meeting with the firefighters’ association at a local fire station to determine what help was needed and to possibly arrange chaplain’s visits to the families.

The organization provides services, benefits and information, and a relief fund for about 16,000 active and retired firefighters and their families.

In an interview with the Miscellany at the time of his induction, Monsignor Roth said he first got involved with firefighting in 1983 when he served as a priest on Sullivans Island. When he learned there was a shortage of volunteer firefighters, he offered to join because he was on the island during the day while others often were at work.

He took courses at the South Carolina Fire Academy to become certified as a state firefighter and then a fire officer.

Over the years, Monsignor Roth served as chaplain for fire departments in Sullivans Island, the Isle of Palms, Aiken, Myrtle Beach and the city of Charleston. He also serves as chaplain emeritus for the South Carolina State Fire Chiefs’ Association and the State Fire Instructors Association.

“Being a chaplain keeps me busy, and as a Catholic I’m sort of alone out there because we just don’t have a large Catholic clergy presence in the fire community,” he said. “There are a lot of firefighters who are Catholic.”

Late in the afternoon June 19 the coroner released the names of those who died in the warehouse fire, and Monsignor Roth began visiting their firehouses.

Those who died were: Capts. William “Billy” Hutchinson, 48, Mike Benke, 49, and Louis Mulkey, 34; Engineers Mark Kelsey, 40, and Bradford “Brad” Baity, 37; Assistant Engineer Michael French, 27; and Firefighters James “Earl” Drayton, 56, Brandon Thompson, 27, and Melven Champaign, 46. Together the men had about 131 years of service with the fire department.

Contributing to this story were Deirdre C. Mays and Christina Lee Knauss in Charleston.