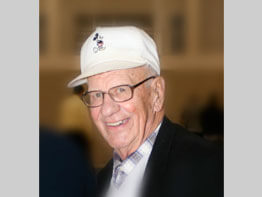 People on the street, in the local grocery store and at Loyola Blakefield’s homecoming games and golf tournaments all came to associate the Parkville resident with a time-worn, white hat which featured the cartoon star.

When the St. Isaac Jogues, Carney, parishioner died July 3 at the age of 83, he was buried in the hat that had been given to him many years ago by his grandson, Billy.

A seventh-grader at Loyola Blakefield in Towson, Billy died in 1993 of complications due to a blood clot.

When it came to his family, his parish and his alma mater, Loyola Blakefield, Mr. Fassio showed relentless dedication. The father of 10 worked as a Dr. Scholl’s salesman to give his children a comfortable life. He loved his wife of 40 years, Marion Moeller, faithfully until her death in 1987. At St. Isaac Jogues, he served as an usher.

The people who know him say his presence is irreplaceable.

“He was a caring, very loyal and devoted man to his family,” said Marion Hilton, one Mr. Fassio’s four daughters. “He was always there for me. I’ll just miss talking to him every day. I already do.”

Mrs. Hilton said her father’s faithfulness was manifested in his desire to never lose track of her nephew Billy’s gift, even for a washing.

“It was pretty filthy,” said Ms. Hilton, of the omni-present hat. “He always told me that Billy gave him that hat and everywhere he went, he wore it.”

Mr. Fassio was the embodiment of the celebrated Greatest Generation.

The 1943 Loyola graduate was a football standout, a U.S. Marine who served in the Pacific during World War II and a real estate and ice cream entrepreneur.

He was quick to impart lessons to his family, particularly in later years. Besides his 10 children and 15 grandchildren (with another on the way), he was always available for the young men who attended Loyola.

The long-serving governor of the school’s alumni board was awarded its highest award, the Father Joseph M. Kelley S.J. medal, in 1998. Over the years, he helped spearhead work on the school’s stadium, gymnasium and dining halls.

He worked as a dining hall monitor, keeping the lunch rush to a minimum while telling students to tuck in their shirts and adjust their ties.

Jamie Myers, director of the school’s alumni relations department, said Mr. Fassio was willing to take on “the most boring jobs” required.

“The school really was his second family,” Mr. Myers said. “He made me feel like he was one of his grandchildren. It was truly moving when I saw all his grandchildren crying at his funeral. I was crying. He was this very warm, generous, lovable kind of guy.”

“We always knew how much that race meant to Art,” Mr. Myers said.